Meaghan Francella of Port Chester, NY was an All-American collegiate golfer at the University of North Carolina. After her LPGA debut in 2004, she won her first victory on that tour in 2007 in an extended playoff against Hall of Famer Annika Sorenstam.

She left the Tour several years later and worked for the LPGA and other companies. Francella eventually returned to golf as a teaching professional. She recently became the LPGA teaching pro at Philadelphia Cricket Club, moving from Wilmington, DE to what she described as a “frat house,” sharing the club’s staff housing with several others.

In 2021 Francella returned to high-level competition, earning an eighth-place spot in that year’s LPGA Professionals National Championship. That finish also put her in the field for the 2022 KPMG Women’s PGA Championship, held at Congressional CC in Bethesda, MD. 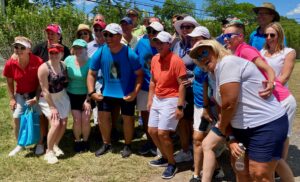 Her accomplishments led to a sponsor’s exemption for the 2022 ShopRite LPGA Classic presented by Acer.

During a Media Day interview for the ShopRite, Francella said she is now “mentally committed to playing and having fun.” She said she did not have fun during her last few years on tour, a major reason she left.

Francella noted the difference on the current tour compared to her prior time there. “If you’re not hitting 250 [yards off the tee] you’re in the bottom third for distance. The game’s getting longer, and the girls are getting stronger and younger.”

Her outlook on playing also changed. I asked Francella what she now knows and appreciates. “I think taking time for yourself and having a life also. That gives people a little more longevity. You put your heart and soul into everything and you’re 24/7, but at some point, life gets a little lonely on tour by yourself. If I had to do it differently, I would try to have a better balance,” she said.

Francella also said living in New York gave her a “forced rest” from golf in the off-season. “I think now you don’t see players taking a lot of time off. They’re playing 8-9 weeks in a row. That’s a lot of golf,” she said.

Her mother’s recent health challenges, requiring Francella to spend several months with her in Florida, also added to her perspective.

LPGA players Kristen Gillman and Alena Sharp joined Francella for her first round at the ShopRite, along with at least two dozen ardent Francella fans.

After parring the first two holes, Francella raised the crowd noise with a 12-foot birdie putt on the par 5 third hole. She came back to earth on the challenging par 4 sixth hole, three-putting from 35 feet for her first bogey. Francella then made a nice chip to make par from 2 feet on the par 3 seventh.

Her par on the eighth hole was even more impressive. Francella’s drive landed on the cart path left of the fairway, and then bounced on the pavement a few more times until it finished hole-high in the rough, about 45 yards from the center of the green. She couldn’t keep the next shot on the elevated surface, requiring a delicate chip that finished 2 feet from the hole. Her par putt must have been a relief.

Francella then made her best moves of the tournament, with birdies on the par 5 ninth, the par 4 10th, and the par 3 11th.

She parred 12 and birdied 13, again making about a 15-footer. A par on 14 kept her going, but she faltered a bit on the long uphill par 3 15th. Her tee shot came up well short. A chip from there ran about 9 feet above the hole. Making bogey from there was perhaps the best she could do.

Francella parred in from there. Her crowd of well-wishers surrounded the veteran next to the scoring tent. Her mother was there, having ridden the course on a mobility cart and somehow staying out of her daughter’s sight most of that time.

Francella was visibly tired and excited in post-round interviews. “I really stayed committed to every shot I hit.” As for her troubles on the 15th, Francella said, “I hit a really bad shot. Normally I would get super mad about that. I was like, whatever. It is what it is.”

As for stamina, she said, “I felt really good physically. I lost 34 pounds in the last two and a half months. I knew I was playing this year and I was like, I can’t come out here looking the way I’m looking and feeling the way I’m feeling.”

Francella nonetheless kept a mature outlook: “Again, I’m not quitting my day job. This is for fun, right?”

That refreshing sense of proportion probably came in handy the next day. Francella followed up her 3-under par 68 with a 4 over par 75 in the second round, missing the cut by a single stroke.