My tastes in literature are pretty broad, I suppose.

I also enjoy reading detective stories, travelogues, and novelists with the talent to describe technical details in laymen’s terms. 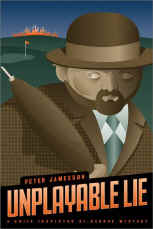 Jamesson manages to mix together all four elements into a pleasantly beguiling introduction to his new hero’s adventures.

St. George works for Scotland Yard, which despite the famous crime-fighting organization’s title is based in London. Normally, the men and women of the Yard are limited to solving crime in and around The City, but under the proper conditions they can be sent to other locations—even Scotland, for example.

A high-tech computer plant between Glasgow and Edinburgh burns down under starkly unusual circumstances. In the ashes inside the modern building lie the crispy crunchy remains of one of the company’s owners.

Something about his death seems just a little too odd, however, even after the local coroner finishes his work. In addition, the company’s status in the local business community seems to have an unusual effect on the local chiefs of the fire and police departments.

A quiet request is made to London, and Inspector St. George is dispatched to the scene, eventually accompanied by his trusty Det. Sgt. Laurence Poole.

The company’s three owners are all related, and the two surviving businessmen have decent alibis. In fact, one of them tells St. George that he was playing golf at St. Andrews with some prospective Japanese partners when the plant burned.

St. George, an avid golfer, is delighted to pepper the man with questions about his round, based on the inspector’s own frequent jaunts to the home of golf as a spectator at the Open and other tournaments.

There are many other problems to figure out, however, which are completely unrelated to golf. Poole and St. George need to understand the nature of the company’s computer business, its finances, and the world of international business. This leads them to the quiet, understated, yet dangerous elegance of the Scottish banking system.

They also require the initially reluctant assistance of their favorite medical examiner, Dr. Marcus Woolsey. He and St. George have a long history together, as it develops, and it will be fun to learn more of the backstory between these two as this series continues.

There is also the nagging problem of being outsiders in an area not too keen on their English presence. St. George and Poole figure out how to deal with the Scottish police bureaucracy, recruit some able local assistance, and neutralize their opposition. The interplay will be familiar to readers of the detective story genre, especially the British variety.

The action moves back and forth from Scotland to London, and the eventual resolution requires a trip to St. Andrews. St. George and Poole travel to the little town and while away a day taking in the sights. This extended segment read more like a travelogue than a detective novel, but there is a point to most of the description of the Old Course and the surrounding community.

One extended scene involves our intrepid pair, the caddie master at the Old Course, and a golf cart. There are no spoilers in this review, but I do suggest you pay close attention.

There is much else to enjoy about this novel, not least of which is the seemingly realistic, amusing banter between St. George and Poole. It reminded me a bit of Nero Wolfe and his able assistant Archie, and that’s a good thing.

Jamesson deserves credit for his interesting addition to the mystery fiction genre, with its golf twist. I hope his next effort is at least as enjoyable as this book proved to be.