Not so hot at reading the radar

Some golfers fancy themselves as nearly godlike in their ability to determine when and where it might rain. Repeated proof that this assumed talent is non-existent seems to have no effect.

On Monday, November 11, I thought I’d play a round of golf. The forecast predicted a sizeable threat of thunderstorms. On the other hand, the Weather Channel radar showed a band of rain that looked like it just might miss Shawnee Country Club.

The club doesn’t open its course for play on Mondays until 10 a.m., so there wasn’t any rush. In addition, a large group of retired members called the Ball Tossers often tie up the first five or six tee times once play begins. I assumed there was no need for me to reach the club until about 11.

I left Rehoboth and drove immediately into a rainstorm before I reached Five Points outside Lewes. Looking west, however, I thought I saw a break in the clouds, and kept going toward Shawnee.

The downpour continued for most of the rest of the ride north to Milford, and let up slightly as I parked the car in the club’s lot. After a minute or two, the rain stopped completely.

I chatted with the pro shop staffer for a few minutes, and began some putting and chipping practice.

After a few minutes, I heard a slight rustle. I looked west, and could no longer see the 18th hole’s tee box, 500 yards away.

The noise increased, and I could no longer see the 18th hole’s fairway bunkers.

A whooshing sound then came rushing past, and a terrific downpour chased me off the putting green and into the pro shop.

The TV was playing the Weather Channel, and the radar showed broad bands of dark green and yellow over all of Sussex County.

In retrospect, I might have been a bit optimistic.

Cape Region snowbirds heading south this fall along Interstate 95 will see a billboard or two featuring a handsome couple in an advertisement for the Osprey Cove development, outside St. Mary’s, Georgia. 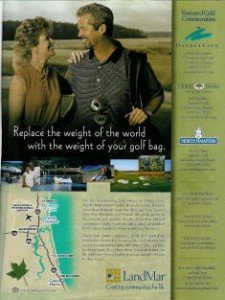 The travelers might assume that this ad used models for this purpose. After all, the pair’s smiling faces and good looks are clearly intended to give the impression that the well-known golf course/residential community just north of Jacksonville, Florida is full of such attractive people.

In this case, however, these folks are the real deal, and there’s a Cape Region connection to boot.

The couple’s names are Bill and Vicky Maxwell, and they really do live in Osprey Cove. They’re both golfers, and there’s no debate about which one is the better golfer (it’s Vicky).

Bill, on the other hand, has some questionable taste in friends, including yours truly. He’s part of the Georgia contingent that accompanies Kings Creek resident Kevin Conlon, Conlon’s three brothers, and assorted others on the Conlon Brothers annual spring golf trips.

Since we met almost ten years ago, Bill, Kevin, and I have played many fun rounds together.

Maxwell doesn’t let his high handicap impede his ability to enjoy himself. On occasion, he’ll let loose on occasion with an anguished “Aw, come onnn, Beel” or something a bit more colorful and unprintable.

Usually, however, one hears far more laughter around Maxwell than anything else.

Maxwell said that Osprey Cove’s community manager asked them to help out, and he and Vicky were surprised about all the places their picture began to appear: “We originally thought the picture would be used only a community brochure and nothing else. Well, we got fooled because friends alerted us to the magazine picture and then the interstate billboard. So, our faces are everywhere right now. Don’t know that it’s helped with sales, but it sure has created a lot of fun talk.”

A couple of us have every intention of having even more fun with this picture when we meet Bill again next spring.