It’s time once again for the holiday book-buying season, and Hole By Hole is ready with a new batch of five selections.

America’s Linksland: A Century of Long Island Golf (Sleeping Bear; $55 SRP) is a coffee-table style book that is not only impressive for the beautiful photographs by L.C. Lambrecht that grace its pages.

Long Island also has a remarkable historical heritage in American golf, and William Quirin does a good job of explaining how and why this spit of land was so influential.

The Island is blessed with linksland that made Scottish golfers think they were back home, as well as rolling tree-lined hills that helped develop the parkland style of golf course architecture.

The fact that Long Island was a haven for rich New Yorkers who sunk their money into creating these courses probably didn’t hurt, either.

The book includes a nice mix of old and new photographs, as well as hole-by-hole descriptions of some of the more famous layouts such as The National. One picture of the fifth green at Bethpage Black was taken from nearly the exact spot we stood during most of the third round of this year’s U.S. Open.

The PGA Manual of Golf: The Professional’s Way to Learn and Play Better Golf

It’s actually a very good instructional primer on the basics of golf—the grip, the stance, the address, the takeaway, and the forward swing.

The book is filled with stop action photographs and short pieces on the different parts of the golf swing, as well as segments on routine tactics, such as chipping, sand play, and dealing with the wind.

Rick Martino, PGA of America’s Director of Instruction, helped by long-time golf writer Don Wade, rarely misses an opportunity to suggest readers should use the Manual along with a regular course of instruction by their favorite PGA professional. (That’s not just marketing, that’s just good sense.)

For the last couple Christmases, some of my family members have given me a book from Dr. Richard Carlson’s Don’t Sweat the Small Stuff self-help series.

Maybe they’re trying to tell me something.

The editors of the Don’t Sweat Press are now cashing in on the brand, with their own Don’t Sweat Guide to Golf (Hyperion; $10.95 SRP).

Carlson chipped in, as it were, with a foreword for this little paperback.

Perry Maxwell’s Prairie Dunes (Sleeping Bear; $45 SRP) is a beautiful reminder that the heartland of America is home to gorgeous, challenging golf courses. 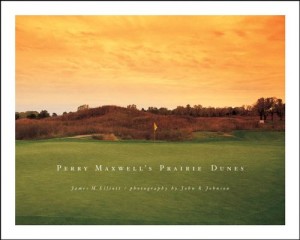 Unlike many coffee-table books, this one focuses on a single layout.

Mal Elliott, a long-time sports writer in Wichita, Kansas, chose wisely in writing about how Oklahoman Perry Maxwell became a golf architect and was selected to design the new course outside Hutchinson, Kansas, on links-like property that seemed out of place with one’s normal mental image of the Midwest.

The mix of Maxwell’s talents and the receptive canvas on which he worked led to this 20th Century architectural masterpiece. 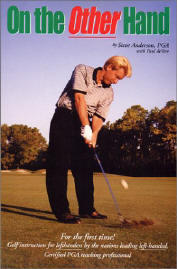 On the Other Hand

I didn’t really appreciate how right-handed most golf instruction books are until I read one dedicated solely to the needs of left-handed golfers.

PGA professional Steve Anderson and golf writer Paul deVere joined together to publish On the Other Hand (Saron Press; $15.95 SRP), and this paperback should be a godsend for left-handers looking for a book they don’t have to hold up to a mirror.

It covers all the basics of the golf swing and course management, this time from the left perspective.

After reading it and struggling through the mental translation required for my right-handed brain, I have a much better appreciation for the real contribution Anderson and deVere made for the lefties among us.