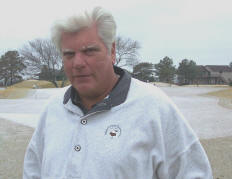 Ron Barrows is the dean of Cape Region golf professionals. And that’s not just because he’s been the head golf pro at Rehoboth Beach Country Club for over 36 years.

Many of the other golf pros in this area have Ron to thank for helping them enter the business, including Butch Holtzclaw, Pete Oakley, John Wallet, and, of course, Ron’s son Brian. In addition, Barrows helped hundreds of junior golfers as a founding member of the DSGA Scholarship Fund.

Over the years several thousand RBCC members have also enjoyed dealing with Barrows and his wife Joanna (“JoJo”) in their popular, well-stocked golf shop.

“I grew up in Newark playing golf. My dad worked for Hercules, so we belonged to the Hercules club. We also lived very close to Newark CC, and were members there, too. One day, Joe Aneda, the old pro there, asked me to watch the shop for him for a bit. I was 10 and always hanging around. While he was gone, I sold a pair of shoes, a shirt, and some golf balls. You could say it started then, but I really started working in the shop when I was 12.”

Barrows worked at Newark CC through high school, and continued there while at Goldey Beacom College in Wilmington.

He learned about the golf professional opening at Rehoboth Beach, and applied for it. “Walt Bennett was friends with Hugh Gallagher, a long-time member at Newark. Gallagher and Aneda went to bat for me.”

Other than a short stint with the National Guard, Rehoboth Beach CC has been Barrows’ only employer. That’s pretty remarkable, considering that most golf pros change jobs frequently.

His first few years here gave no hint of what Cape Region golf would be like in the future: “It was really different then compared to now. The club was open all year, but in the dead of winter, like now, there might be only one or two members that would play. I’d open the shop at 11, and close at 1.”

Not too long thereafter, he married JoJo, and brought the Newark native down to their new home. “She took a while to get used to the area back then, because there were so few people living here year-round. You had to drive to Dover or Salisbury for any real shopping. That’s not a problem any more around here, is it?,” Barrows grinned.

I’ve always been impressed by Ron and JoJo. They’ve worked and lived together for over three decades, and their love and affection for each other is obvious. So is their ability to tease each other mercilessly, which may be the secret.

While discussing his own philosophy of teaching golf, Barrows quoted one of his mentors, Percy Vickers, the former head professional at Bidermann CC north of Wilmington: “There are two ways to play golf: finesse, or brute force and blunt ignorance.” Barrows clearly prefers the finesse approach.

“In my clinics, we start from six inches from the hole. It’s as much a matter of assuring success as it is psychological. Then we work on longer putting, then chipping, then pitching, and then the full swing. In each case we’re just extending the original movements a bit further.”

Barrows doesn’t lock himself into teaching one method of playing golf, however. “You have to keep an open mind about how to bring out each student’s ability. There’s so much variation in skill, body size and shape, flexibility, and so on. You just have to adjust your teaching to the student.”

Barrows became reflective during our conversation. “I’ve always known what I wanted to do with my life, and I’ve been really lucky to be able to do it. We have really great members here. I’m always grateful that I’ve had the chance to stay here as long as I have.”

A lot of golfers in the Cape Region feel the same way about Barrows.