When the high summer temperatures hit with a vengeance this past week, the Bermuda grass fairways at Shawnee Country Club near Milford went just a bit nuts.

You can almost hear the grass growing as it soaked up the hot sun that’s been all too rare this past spring.

As usual, during the winter Shawnee’s fairways were brown, as the Bermuda lay dormant. It usually takes at least a week or so of very warm weather to turn them back to green, and the rainy cold spring slowed down the process considerably, according to Shawnee course superintendent Steve Zeveney.

“The turf was about a month and a half behind normal, but I’d say there’s been a couple hundred percent improvement in just the past week,” Zeveney said.

Shawnee sprigged its fairways with Bermuda seedlings several years ago, and the conversion from the old fairway turf has mostly been successful. The combination of last summer’s drought and the snowy winter didn’t help matters, however.

As with other Cape Region courses, Shawnee was forced to make a trade-off when it came to choosing the grass for its golf course.

The mid-Atlantic region of the United States is in a transition zone. That’s not a reference to the cultural differences between the North and the South–it’s agronomic.

Turf experts such as the USGA’s Green Section recognize that maintaining good turf year-round in the mid-Atlantic region is about as hard a job as anyone can ask a golf course superintendent to perform.

Shawnee chose to go with a relatively new hybrid Bermuda grass called Vamont. The first versions of this variety were found in 1980, growing on a golf course fairway near North Wilkesboro, North Carolina. According to the Virginia Crop Improvement Association, 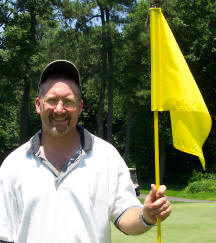 “It is medium textured with few, if any, seed stems. The grass is medium green color, spreads vigorously, and forms a dense turf which appears to have good tolerance to traffic.”

This particular hybrid is also recognized for being better suited to survive a harsh winter than other popular Bermuda hybrids such as Tifway or Tufcote. In fact, Shawnee is about the northernmost golf course in the transition zone that uses Bermuda grass, according to Zeveney.

During the winter the Vamont turf provides another benefit. In February Zeveney and his crew are usually able to spray Round-up® directly on the fairways. The weed and grass killer eliminates poa annua and other weeds, without harming the dormant Bermuda. Unfortunately, this year’s snow eliminated that option. “Logistically, we just couldn’t get it done,” said Zeveney. As the turfgrass grows this summer, therefore, it will face a bit more competition.

Zeveney also noted that with the greening of the fairways, he can now see where the “spring dead spot” is. The disease’s name means exactly what it says. As the grass turns green in the spring the dead spots appear, usually about a foot in diameter. Zeveney said that the healthy turf will eventually grow into the spots during the summer, but “it’ll take a while.”

Here’s a playing tip about Shawnee’s Bermuda fairways. The ball sits up very nicely on the turf, but it doesn’t roll as far as on bentgrass. Players who aren’t used to the Bermuda often find themselves with a longer approach shot to the green than they expected. Some golfers can do much better using their three-woods than their drivers, because the ball will carry farther with the more-lofted club.

Can’t say we didn’t warn you.