Ty Mayers wouldn’t be where he is today, if it wasn’t for trespassing. 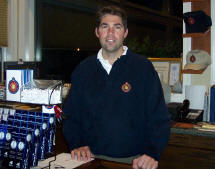 He recently celebrated his tenth anniversary as the head golf professional at Kings Creek Country Club, but it’s also just past twenty years since his first contact with a golf course.

At the time, Mayers was a 15-year-old high school freshman living just outside Baltimore, Maryland. He was none too pleased to find out that his new home just missed the two-mile limit that would have qualified him for a bus ride to school.

Fortunately, the county’s Longview Golf Course sat between his home and school, offering a tempting short cut. Mayers soon “found” a hole in the fence, and pedaled his bike every day across the golf course to and from school.

Occasional shouts and warnings from staff and players didn’t faze him, until one day Longview’s assistant pro stood waiting for Mayers as he rode up to his fence hole.

That led to 60 days of working at the course for free, to work off his “crime.” It also led to a real job offer when the 60 days ended.

Mayers has remained in the golf business ever since.

“Two of the assistants, John and Frank Invernizzi, taught me everything, including how to play,” Mayers said. He worked full-time in the summers and part-time during school, cleaning carts and lugging golf bags. He also steadily improved as a golfer, a new sport for the avid lacrosse player.

In July 1986, Mayers joined one of the pros on a ride to another course to play his first real golf tournament. Unfortunately, they became victims of a serious car crash while en route. A broken arm kept Mayers from playing golf for over twelve weeks. He didn’t begin playing again until the spring of 1987.

Two summers later, the pros at Longview heard Mayers announce he was quitting golf. At the prospect of seeing their young protégé leave the business, they quickly arranged for a job interview at the famous Hunt Valley golf club, buying Mayers his first suit for the purpose. Hunt Valley hired him, and “that was my first experience with the private club experience,” Mayers said.

While at Hunt Valley, Mayers began his minimum 36-month apprenticeship toward earning his PGA card. In addition to class time and working at the club, Mayers also struggled to pass his Playing Ability Test. “I was on the PAT Tour,” he said, trying to score two consecutive rounds in five-over or better each time, and failing five times. Mayers finally passed on his sixth try while competing in the 1992 Mid-Atlantic Assistant PGA Championship at Williamsburg, Virginia.

Mayers continued working at Hunt Valley, and in the summer of 1994 a member of that club invited him to play a round at a brand new course in Rehoboth Beach. He was deeply impressed by what he saw at Kings Creek, and told a few folks what a “gem” it was.

Someone listened. That experience led to an interview, and Mayers began working at Kings Creek shortly after Labor Day 1994.

Mayers says that running the tournaments and teaching the members are the most enjoyable parts of his job, but he also recognizes that basic member services are the “most important” aspects of his position. “It’s everything that makes this place enjoyable for the members, from making sure the towels are in the carts, to overseeing the staff, to making sure someone answers the phone for members scheduling tee times–all of it.”

Mayers deeply appreciates the helping hand he received from the golf pros at Longview twenty years ago. After all, who would think that just cutting through could lead to what he’s doing now?