I think I was inspired by watching Matt Thompson out-drive me by 50 yards or more on every single hole other than the par 3s during our recent Shawnee Cup match.

After a whole day of this, I decided that maybe I should be fitted for a new driver.

There’s nothing really wrong with my steel-shafted, steel-headed TaylorMade 200, but it’s about six model years removed from what they’re selling now. They say golf equipment is much improved, and I was determined to see if that was true.

I met with Devon Peterson, the popular PGA pro at Shawnee Country Club, at the club’s practice range on a recent Friday afternoon. After I warmed up, Peterson presented me with carefully taped golf clubs from five different companies.

He put a range ball on a long tee, and handed me the first new driver. “Let’s see,” he said. That first shot was a little tentative, but the trajectory was also twice as high as my normal drives. This was a repeating element of every one of these new clubs.

“The new clubheads get the ball in the air as high and as quick as possible. The high trajectory helps keep them straight, and they don’t produce as much sidespin,” Peterson explained.

I made a conscious effort not to look at any identifying feature on the clubs that could tell me the loft or the shaft flex. I didn’t want any such information to affect my opinion, other than how I was hitting.

Peterson stared down the range and watched the results after each drive, with several tee shots for each of the first four clubs.

For two of the clubs, the results were frankly unimpressive. For two others, however, the ball flight was usually a nice little high draw, with obvious mishits producing a slight fade or push.

Peterson told me he was going to sit in a golf cart at the far right-side corner of the range. I was to hit two drives with each club, and give him a clear hand signal if I thought each drive was well-struck.

After he took his position, I took careful aim down the middle of the fairway with the old TaylorMade, and swung away.

I yelled “Fore” in time for him to duck that shot.

The rest of the drives were good, however, and he drove back to tell me why he stood out there.

“I wanted to see where your shots landed with the new clubs compared to your old driver,” he said. “Based on the way you swing, I’d have thought that the Cobra would be best, but you were hitting the Hogan 10 yards longer and straighter. It was also 20-25 yards longer than the TaylorMade.” 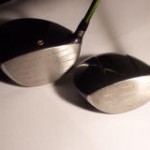 The new driver club heads are noticeably larger than older models. On the left is a Ben Hogan C-S3 titanium design, and on the right is a TaylorMade 200 steel-head driver.

Peterson suggested that the Hogan seemed to fit my eye better, that the weight of it seemed to suit me. “You swing it freer than the Cobra,” he said.

It was an easy decision after going through that process. The other two clubs I tested were a Callaway 454 TI, with an 11 degree loft and a regular graphite shaft, and a TaylorMade R5 Dual, with 9.5 degrees loft and a regular graphite shaft. The club I didn’t hit was a Ping G2, which Peterson said was not a good candidate for me based on how I hit the other four clubs.

Out on the golf course, the improvement continues. A well-struck drive goes about 25-30 yards longer than I had been seeing before. I probably won’t out-drive Matt Thompson anytime soon, but our tee shots will be closer together next time.

Your own experience will vary, of course. No one swings a golf club the same way. That’s why it’s important to seek professional assistance. You can reach Peterson at 302-422-7010, and the other Cape Region PGA pros will also be glad to help.