Nicklaus celebrates one of his new creations

During his heyday as the best golfer on the PGA Tour, Jack Nicklaus enjoyed a reputation as a deliberate, meticulous player.

Although he’s now firmly established as a premier golf course designer, and rarely appears on Tour, he’s still inclined to be precise. 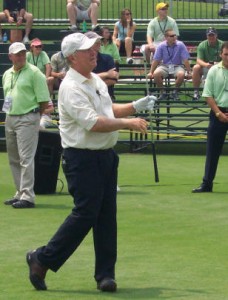 Jack Nicklaus watches one of his pitching wedge shots land on the practice range at The Peninsula, the new upscale golf course he designed. Nicklaus officially opened the course on June 29, with a press conference, warm-up clinic, and a narrated round of golf before hundreds of fans.

On Thursday, June 29, Nicklaus traveled to the Cape Region to play a ceremonial first round at The Peninsula, the beautiful new course that is the centerpiece of Larry Goldstein’s upscale Millsboro development.

Nicklaus appeared at the press conference tent right on time. He sat down, took a look at his golf bag standing next to his chair, and began rearranging his irons to make sure they all lined up the same way. Then he turned to the reporters and began fielding their questions.

Nicklaus said he hadn’t been playing much lately. “I think I played twice this month. I’m well-prepared for today,” he grinned.

As for what he found when he first visited the site, Nicklaus was also characteristically blunt. “It was a pasture. It was a flat field. We took the center up, and from the clubhouse area there’s now a nice view corridor to the bay.”

When asked to describe the hardest design issue he faced at The Peninsula, Nicklaus had a ready response. “The hardest issue here was the drainage. Besides being flat, there were some relatively heavy soils. With the changes we made, this golf course takes the rain very well.”

Nicklaus also explained that the property featured several different elements spread out over the acreage, included heavily wooded areas, marshlands, and the water surrounding the acreage. “The property dictates what you do.” He said he appreciated the fact that Goldstein gave him such free reign in deciding how best to route the golf course through the property.

He also mentioned the need for flexibility. For example, Nicklaus mentioned that the women’s tee for the 13th hole needed to be adjusted, something he didn’t recognize at first. “We could see that the ladies can’t play this. So we went back and fixed it.”

I told Nicklaus a few golfers who had played The Peninsula felt that it was a great layout for 20-handicappers, in contrast to some of his earlier designs, and asked for comment. Nicklaus raised an eyebrow, and then said he didn’t know what other courses those folks were comparing this one to.

He then explained that for several of his first designs, the owners specifically asked him to make their courses suitable for tournament play. For a resort/real estate-related layout such as The Peninsula, however, Nicklaus readily acknowledged that making the course playable and enjoyable for regular golfers is his primary goal.

As he put it, “This is not meant to be Winged Foot,” scene of this year’s remarkably tough U.S. Open.

I then asked him for a comment on this year’s Open, thinking he would discuss Phil Mickelson’s questionable course management in the final round.

Instead, Nicklaus said, “I didn’t see the Open. I don’t like to watch golf. I like to play golf.”

That brought forth another burst of laughter.

Nicklaus also discussed his work as honorary chairman of the First Tee program, which brings golf instruction to kids that wouldn’t normally be exposed to the sport. The day before, he had testified before a Congressional committee about golf’s benefits in imparting life lessons as well as developing an appreciation for physical fitness. He talked about how two First Tee graduates spoke before the same committee, and how their testimony moved him and several others to tears. “Those kinds of kids are why I got involved in First Tee,” Nicklaus said.

After a few more kind words for Goldstein and the new course, Nicklaus ended the meeting to begin preparing for a warm-up clinic and his official opening round.

I normally don’t see reporters applaud at the end of a press conference.

They did this time.