The recent ice and snow conditions have made Cape Region golf shop owners a little more lonely than usual.

Nonetheless, they’re preparing for the upcoming golf season with a variety of new golf equipment offerings.

Ed Larkins, of Clubhouse Golf on Rehoboth Avenue Extended, brought out a well-thumbed copy of the February edition of Golf Digest Magazine, the annual equipment issue.

“It’s amazing. Buyers really rely on the ratings in here, and come into the store asking about the ones they saw that got the gold or silver,” Larkins said.

Larkins noted some of the new offerings likely to be top-sellers. “The Callaway Fusion FT-1 is one of the new square-body drivers, and it’ll list for $500. The other ones we’re getting in include the Nike Sasquatch Sumo and the Sumo Squared. That’s another one of the square drivers. It’ll sell for $400. There’s also the Big Bertha 460 that looks like it’ll be really good. I’ve ordered more of the 460 than I did for last year’s X-Series,” he said.

Not every club needs hyping. “The Ping Irons and the Ping G5 Drivers sell themselves,” Larkins said. As he explained, the better players tend to know the clubs that can give them the performance they seek.

For the rest of us, Larkins suggested looking at what the industry calls game improvement irons, and for high-handicappers, super game-improvement irons. The Golf Digest piece says that this latter category features “larger heads, wider soles, and gobs of offset [that] define a clear purpose to get the ball airborne.”

Larkins uses his indoor golf simulator set-up to help fit golfers to their clubs. Recently a golfer came into the shop planning to buy a Mizuno MX-25 game improvement set. “Then he tried an MX-32 muscle-back, and he was just killing it—10-12 yards longer with a 6-iron. So there’s no substitute for trying the clubs out before you buy,” he said. 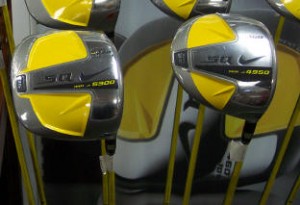 Bret Marshall of Ruddo’s Golf, on Route One, attended the PGA Merchandise Show in Orlando, Florida in late January. “There’s a lot of nice stuff coming out,” he said.

Marshall kept appointments with sales representatives from several lines of apparel and equipment that the store already carries. In addition, he took a day to just wander around the huge convention, checking to see if they’d overlooked something that might work well for them back in the Cape Region. “You just never know what all’s out there, especially among the training aids and accessories,” he said.

Late last year, Marshall tried out the new Callaway drivers at the Golf Park driving range, and said they felt really good. “The Big Bertha [460] will sell for $299, and I liked the feel of that. I think that one will do well.”

Marshall also offers a club-fitting process, although he much prefers to conduct the fitting outdoors. “When the weather’s better, I’ll be able to do more. One poor guy’s been here for the last few Saturdays, but it’s been in the 30s and windy, so that doesn’t help.”

When it’s warmer, Marshall makes fitting appointments within a few days of the initial contact. He then talks with the buyers about their swing, their handicaps, and preferences. He brings 4 or 5 sets of clubs to the range, and has the buyers hit off lie boards to determine the proper lie angle. He also uses a swing speed gauge to help determine the proper shaft. “Somebody that swings at 85 miles per hour should use a regular shaft, but someone that swings a 6-iron at 95 needs a stiff shaft,” Marshall said.

The order usually comes in a week or two after the fitting is completed.

Now would be a great time for Cape Region golfers to check out what’s new at their local shops. It’s not like they’ll have to fight the summer crowds any time soon.