Clampett’s new golf book all about the swing 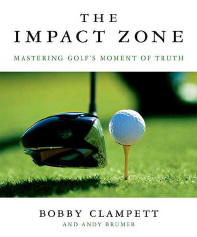 There are at least two kinds of lags involved in The Impact Zone, Bobby Clampett’s intriguing new book on the golf swing (with Andy Brumer; Thomas Dunne Books, $24.95 SRP).

One of these was certainly intentional, but I’m not at all sure the second one was Clampett’s doing.

Unlike many golf instruction teachers, Clampett doesn’t preach the virtues of a particular swing technique. For the former PGA Tour star and current CBS golf commentator, there are many perfectly acceptable paths to a good swing, as he shows in his descriptions of swings as dissimilar as Lee Trevino and Jim Furyk.

Nonetheless, as he explains with Andy Brumer’s help, there’s a key common point to all good swings, in the area just before and especially after the point of impact. Clampett argues that all such swings feature a slightly downward motion, with the bottom of the swing arc reaching a specific spot a few inches in front of the ball’s position.

He suggests that this is true even for the huge new drivers, as well as for putting.

One can just imagine how happy golf course superintendents must be to learn about Clampett’s advice, with the prospect of millions of divots appearing at local clubs and driving ranges.

Clampett strongly urges golfers to work on lagging the club in the forward swing, to have the best chance to make the swing arc reach that desired location past the ball.

Here’s where the second lag came up for me as I read the book.

My comprehension of this part of his teaching lagged behind my reading. These passages often took two or three readings, followed by a little visualization episode, before I found myself thinking, “Oh, okay. That’s what’s he’s talking about. I get it now.”

This episode repeated itself several times. On reflection, it helped illustrate a basic point about sports teaching in general and golf instruction in particular.

There are several very different ways to learn. Those differences take on added consequence when writing about a dynamic process with simultaneously moving parts.

Clampett’s prose is as clear as he could make it, which one would expect with his long-time sports broadcasting background. On the other hand, being able to see exactly what Clampett writes about really does make it far easier to comprehend.

This really hit home during a recent Golf Channel broadcast of the new AT&T National tournament. Clampett seized a chance to explain his lag theory while discussing a Tour player’s swing being shown on the screen. Having recently finished Impact Zone, I knew what he was saying because it was a near copy of his text–but being able to see the swing action in slow motion really made a difference.

Clampett uses still photos from the CBS broadcast in the book, but even these pictures were no match for the slow motion video showing the process in its entirety.

Perhaps I’ve stumbled onto a good method to best appreciate Clampett and Brumer’s analysis. Read the book and then watch the CBS/Golf segments that illuminate these instructions.

Clampett’s disarming style when discussing his own swing troubles should also be helpful. A bit of a child prodigy, he had an immediate impact on the Tour when he first came out. Unfortunately, he also developed a set of ears that were too ready to listen to conflicting advice on how to improve his game even further. Clampett takes full responsibility for the ensuing downturn in his golfing career, but obviously appreciates his current broadcast connection to the sport.

The fact that his own swing has now largely recovered, as shown in Clampett’s now-rare but decent performances on Tour, should not be lost on anyone.

That kind of endorsement should be easy to comprehend.