Grandfathers can be very influential for their grandchildren.

Kevin Wiest gave his granddad all the credit for his golf career. 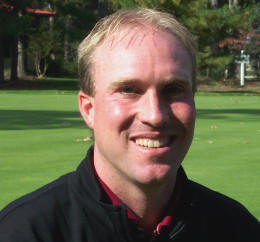 The new head golf professional at Kings Creek Country Club sat down recently and described how he first began playing at age 10.

“It was my granddad. He started me playing with him, so I’d have something to do with him on the weekends. At the time I told Granddad that I had plans to play pro baseball, and I was right-handed. So he found a set of left-handed clubs for me. He also taught me the etiquette of golf, and how to play.”

Wiest grew up in Lancaster, Pennsylvania, and played for the Cocalico high school golf team varsity all four years. He was team captain the last three years, and made it to the State AA District Championships three times.

“When I was a junior, I discovered I could major in golf in college. I got in to Penn State. My degree is in Recreation and Park Management, with a concentration in Professional Golf Management. That included internships for each summer. I worked at Heidelberg in Reading the first summer, and Bent Creek in Lancaster after that,” he said.

Wiest also worked on completing the required activity list to earn his PGA Class A membership. His last summer internship stretched for 6 months, making his bachelor’s degree a 4 ½ year program. He finished up at Metacomet, the famous Donald Ross course in Rhode Island.

From there, Wiest began work as an assistant pro at TPC Avenel in Maryland, in November 1998. After a year’s stint there, he moved on to TPC Prestancia, in Sarasota, Florida.

“Florida was great, but after May it was just too hot. I started looking for someplace closer to home. I sent applications to Merion, Oakmont, the Robert Trent Jones course in Virginia, Saucon Valley, and Caves Valley in Baltimore. I was shooting for the stars. I wanted to go to very respected places that were nationally known,” Wiest said.

The folks at Caves Valley said yes, so Wiest began work as an assistant under Dennis Satyshur in April 2001.

“Caves Valley is a great place. It’s all about making the member’s experience at the club as special as it can be,” he said. “I was an assistant there for three years, and spent the last four as the head golf professional, when Dennis became the Director of Golf.”

Last year, Wiest began looking for his “own club,” as he described it.

“When I found out about Kings Creek, my wife and I saw a lot of positives about it. Professionally, it’s a well-respected country club on the East Coast. I knew some of the members because they were also members at Caves Valley. Everything just kind of fit. I liked the fact that the membership wants to improve the club and its facilities. It’s also a good family club,” Wiest said.

His wife Allison, who earned a Master’s degree as a reading specialist, is staying at home right now with Anna, a newly rambunctious 9-month old. “We brought her here for the settlement on our house, and she made her first crawl here in the pro shop,” Wiest said proudly.

“The welcome from the membership has been overwhelming,” he said.

Wiest will spend his first few months managing and observing his new surroundings. He expects to be able to draw upon his TPC and Caves Valley experience to tweak around a bit, where he sees some improvements could help.

“Our main focus has to be on servicing the members and their guests, to make it as pleasant an experience as possible,” he said.

As for playing Kings Creek, he’s a quick learner. “It’s a shot maker’s course. When I started playing golf, my goal was to avoid double-bogeys. Around here, if you make a small mistake, double-bogeys are easy to make. You’ve really got to focus.”