Modern-day professional golfers have millions of reasons to be thankful for Tiger Woods.

Ever since Woods announced that he was going professional a dozen years ago, the sponsorship money and tournament winnings for PGA Tour members has shot up to previously inconceivable heights.

The current recession has had an impact, though not as much as one might think. The total official purse for 2009 is $100,000 more than last year, and that’s with one less tournament in the mix.

The real hits on professional golfers’ incomes may be off the Tour, such as a sharp reduction in the corporate outings that have been a profitable sideline for being very good at making magic with a little white ball.

In the early 1900s, on the other hand, professional golfers relied on exhibitions and only a few tournaments to supplement their regular income as club pros.

British and U.S. Open winner Harry Vardon was among the first golfers to point the way toward separating the gifted players from the regular club pro, at least in terms of how he earned his money. In this respect, Tiger Woods owes his own debt of gratitude to Vardon. 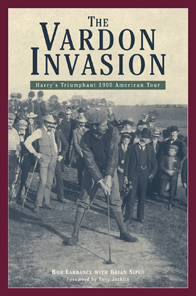 Vardon, a native of the Isle of Jersey, came to golf in the usual way for professional golfers of his time. A golf course was built near his home, and he began working as a caddie. He learned the game quickly, and his natural athleticism, shown in other sports, came through once again.

His tournament success, including his 1899 British Open victory, brought him to the attention of the Spalding Company, an American sporting goods maker. Vardon and Spalding soon came to an endorsement agreement. These are now routine for sports professionals, but were nowhere near so prevalent at that time.

The deal included a yearlong promotion trip through the United States, with a break in the middle to permit Vardon to attempt to defend his British Open title. Vardon sailed over and began his schedule of exhibition matches in mid-February 1900, at the now-gone Laurence Harbor CC in Perth Amboy, New Jersey.

At most of these events, each drawing from a few hundred to a few thousand spectators, Vardon played a match against the better ball of two competitors—usually the club pro and a local amateur champion, but sometimes two pros.

For each event, Vardon earned a reported $250, plus expenses.

In today’s dollars, that translates to about $6,200 per match, not counting Spalding’s costs to put Vardon in a Pullman rail car and send him to Florida, New England, or Colorado. By the time Vardon finished the year, he’d played nearly 80 such matches, which made him a very rich man, especially at a time when there was no income tax.

Labbance and Siplo include in their interesting little history a series of well-written sidebars about most of Vardon’s opponents, both pro and amateur. These pieces help the reader understand not only how well Vardon played against some very good competition, but also about the social milieu for golf at the time, so different from today.

The book also minces few words in describing the occasionally wretched conditions of some of the places Vardon played. Golf was in its relative infancy in America at that time, and Vardon’s diplomatic skills were surely tested after playing on the raw, unfinished courses that hosted him.

At nearly every one of these matches, both the local and major newspapers were there to cover his play, helping to increase the level of public interest in golf at a level not yet seen in America. The fact that Vardon won the 1900 U.S. Open that fall didn’t hurt his marketability, either.

The Spalding folks must have been pleased. Vardon’s special tour turned out to be a highly successful experiment in marketing for the company’s golf balls and clubs.

For the rest of us, this history of Vardon’s 1900 adventure provides an intriguing glimpse at one of the early stages of the advancement of professional golf toward what we enjoy today.