Back to basics, on a new platform

The middle of the golf season sometimes takes golfers by surprise.

After a perhaps shaky start in the early spring, many golfers rediscover what works for them. Their scores begin to come down toward the handicap they had last fall.

As the summer heats up, however, these same golfers may suffer through a slump or two. Tee shots that were so impressive a few weeks ago now seem only to have eyes for the rough. Approach shots to the greens fall short, into bunkers that were easily cleared in mid-June.

When your game takes an unexpected trip south for a spell, it’s always a good idea to go back to the fundamentals on the practice range, and reconnect with what it takes to make a good swing at that infuriating little ball. 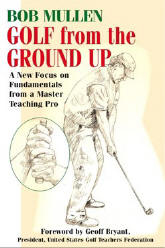 Golf from the Ground Up

Bob Mullen is a Master Teaching Professional at the United States Golf Teachers Federation. After years of service to golfers on an individual basis, Mullen decided to set out some of his best lessons for the rest of us. His new book, Golf from the Ground Up, should be useful not only for golfers in the midseason doldrums, but also for those who have just taken up the game—especially the adults among them. (Burford Books; $16.95 SRP).

Mullen describes how mature students learn differently than junior golfers, and aims his book squarely at the older audience. He emphasizes that motor skills of the type used in golf are usually best learned one at a time. In addition, the time to learn and incorporate those new skills into our old brains can take four weeks or so. In other words, there are no quick fixes, but with the right approach to learning slowly, real progress can be made.

As with most such instruction books, Mullen’s lessons in the fundamentals include extensive passages dealing with the grip, alignment, stance, and ball position. In addition, however, Mullen emphasizes what he calls the platform. In addition to those first four issues, he also teaches the importance of good footwork, the proper rotation of the body, and a new way of thinking about alignment.

For each part of the golf swing, Mullens describes the basics, shows why and how they work together, and then gives the reader some handy drills to enhance the learning process.

It’s true, for example, that some people can learn a new skill just by reading about it. Far more of us, however, learn better by doing. Mullen’s drills, such as those intended to impart an understanding of the importance of the weight shift during the swing, should be really helpful to many struggling golfers.

The illustrations accompanying Mullen’s text may remind some readers of another significant book on the golf swing, Ben Hogan’s Five Lessons. That may have been deliberate, as Mullen also has some very definite ideas about what Hogan was really doing in his swing, compared to what he told his fans in his famous bestseller.

For the more deeply analytical among us, Mullen delves into the physics of the golf swing. He stresses the need to begin the golf swing with a weight shift to the left side (for righthanders), before beginning the hip rotation and shoulder swing portions of the maneuver. As he sees it, the failure to begin the swing from the ground up is the major reason why so many golfers slice the ball, hitting it weakly Golf from the Ground Upfrom the outside in and off to the right.

Mullen also provides some additional tips for other common swing errors that should help both experienced and novice golfers. Personally, I’m hoping that his guidance for those with excess backswings will pay off soon.

The last section of the book is about managing your way around the course, and will provoke some knowing grins from experienced golfers. It’s aimed at helping to avoid the sudden attacks of stupid that can ruin a game, and how to spot the warning signs in time to keep them at bay.

This book should be a welcome addition to any golfer’s library.