Whenever folks reach the stage of life where they have a large amount of disposable income, there’s a conundrum about how to spend it.

After setting aside the usual charitable donations to one’s favorite causes, and providing for one’s heirs (if they deserve it), the next big decision is about whether to buy lots of stuff, or lots of experiences.

This is a very nice problem to have, according to most of us.

Nonetheless, a lot of folks nowadays seem to decide that they have enough heirlooms and collectibles. Instead, they decide to go for multiple exotic vacations to far-flung locales, or similar hard-to-replicate activities far from their normal way of life.

Accumulating these experiences is then checked off on what’s now called the bucket list (as in, things to make sure you do before you kick the…). There’s even been a movie about this phenomenon, using this extremely descriptive title.

The publishing industry is also astute enough to capitalize on this trend, despite its relatively macabre tone. Oregon-based free-lance writer/editor Chris Santella has put out several books of this type, covering such diverse pursuits as diving, fly-fishing, birding, and sailing. 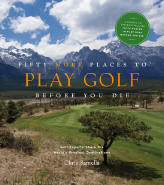 He’s now released his second book devoted to a golf-related bucket list, with his Fifty More Places to Play Golf Before You Die (Stewart, Tabori, and Chang; $24.95 SRP).

I assume that for some readers of the first such book, they recently discovered that they have a little more time on their hands than they first thought they would.

Santella reached out to his own network of movers, shakers, and doers, and convinced them to contribute their own chapters devoted to their favorite courses.

It’s a wide-ranging assortment, with golf destinations sprinkled throughout most of the earth’s continents. Anyone with a combined foreign travel/playing golf bug would really enjoy reviewing these options.

There’s a course in Perth, Australia called the Golf Club at Kennedy Bay that would be awfully tempting to Cape Region golfers right now, buried as they are in several feet of snow.

The Jade Dragon Snow Mountain Golf Club in Lijiang, China, as touted by longtime golf writer Jeff Wallach, may not have been on too many folks’ bucket lists before this book came out. Based on Wallach’s praises, it will soon appear on several itineraries.

The White Witch course in Montego Bay, Jamaica has a Cape Region connection. It was financed and built on land owned by John Rollins, a major contributor to Beebe Hospital. The course winds its way over 600 acres of lush tropical greenery.

Some of the chosen golf courses are far more familiar to most golfers. Golf consultant Tim Moraghan highly recommends Pinehurst No. 2, site of this year’s United States Open. Chambers Bay Golf Course in Washington State also makes the list, and it will host this years United States Amateur Championship.

The book’s closest course to the Cape Region is also a favorite of professional golfers and those living in and around Washington, D.C.—Congressional Country Club in Bethesda, MD.

For each chapter, the writers describe their chosen course in the finest of purple praise, of the type usually found in travelogues and in-flight magazines. They also include a helpful guide for how best to reach the destination, as well as some of the accommodation options available to the golfing tourist.

With this winter shaping up as one of the worst ones ever experienced in the Cape Region, this book is a very pleasant read. Most of us won’t be golfing at these fifty places any time soon, at least not without hitting the Powerball lottery, but the photographs and glowing narratives make for nice daydreams just the same.

An act of golfing kindness goes unpunished, for once

A Ruling of the Day from past week’s selections by the USGA also provides a warning that a random act of kindness may not be viewed that way by others.

I wonder who would have the chutzpah to suggest otherwise?