For the fans at Merion, the greenside viewing stands were distinctly preferable to crowding along the fairway ropes.

The USGA showed their understanding of this fact, providing over 5,000 seats for the amphitheatre setting of the 17th green and 18th tee box.

On the other hand, if you reach the U.S. Open site early enough, you can see how the pros play an entire round from an up close and personal perspective.

You just have to be careful whom you choose to watch.

On Open Sunday morning, Kevin Conlon and I caught up to PGA Tour pro Kevin Sutherland and European PGA golfer Simon Kahn on the second hole. As the 71st and 72d players at the beginning of the round, they were not swamped with fans.

I called out “Good luck, Kevin” to Sutherland, and he turned and smiled back. Kahn also reacted favorably to a kind word.

Conlon and I decided to watch these two as they finished their Open. The other dozen or so folks who had the same idea also enjoyed the view. Both men enjoyed a better last round than their first three had been.

When Sutherland and Kahn teed off on 18, Conlon and I decided to stay seated in the stands just behind the tee box, which also featured an unobstructed view of the 17th green. From there we could watch the rest of the day’s pairings.

Our stand soon filled up completely. After a while, I volunteered to take the short trip to a concession stand for our lunches, while Conlon graciously agreed to hold my seat.

While paying for our chicken sandwiches, I heard the unmistakable sound of a hole-in-one.

When you attend a golf tournament, you quickly learn to distinguish the crowd’s reaction to a birdie, an approach shot that almost goes in, or a long putt that snakes into the hole unexpectedly.

None of those reactions compares to a hole in one.

In this case, I could also easily tell that it had just happened on the seventeenth hole.

Shawn Stefani put himself into the USGA history books with his unlikely ace, the first one ever in an Open at Merion.

Conlon looked almost sheepish as I brought our lunch back to our seats. The timing certainly wasn’t his fault, but it highlights one of the disadvantages of going to a golf tournament in person, as opposed to watching on TV.

Whether you see an amazing shot as an on-site spectator is entirely a matter of fate and timing.

Next time, though, Conlon buys the chicken.

More fun with the players, the fans, and the volunteers

A few other golfers nearly matched Stefani’s shot on 17, with tee shots ending inside a foot from the hole. In most cases, however, the 17th was a difficult par or a fairly routine bogey, preserving Merion’s reputation for its tough finishing holes.

In the huge stands, which were alternatively raucous or quiet as a church on Monday, the volunteers and the fans did not seem to mind the relatively steady diet of pars. One USGA volunteer, Terry, stood out in particular. He was very good at crowd control, throwing up his arms in the Praise Jesus pose to make us quiet, or filling openings as fans left their seats for a different viewing opportunity.

After Mickelson and Mahan hit their tee shots on 18, we stood back and watched the finish from the top of our stands. Conlon’s on-course radio, courtesy of American Express, gave us the news of Mickelson’s last unsuccessful attempt to tie Rose and force a playoff, and the Open was over.

It was a great experience. The USGA and Merion did a great job of preparing and managing a logistically challenging property for a major tournament. As a reporter/columnist, I had everything I needed to cover the event. And as a golf fan, it was fun to watch the finest golfers in the world take their measure against a storied golf course that was up to the task. 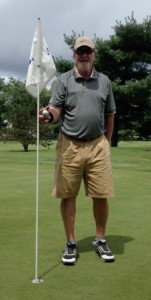 When he’s not busy selling healthy stuff at his Good News Natural Food stores in Rehoboth, Milford, and Dover, Rich Collins can usually be found golfing at The Rookery North.

The 1966 Lewes High School alum said he used a “knock-down” 8-iron for the shot.

Genine Fidler’s 92 was good for low gross, with Carol Perry winning low net with her 72.