Playing with the Pros

When Pete Oakley suggests he and I should play golf together, that is an invitation I should always accept.

The 2004 Senior British Open winner and part owner of The Rookery was in the area, and had a couple days to go before returning home to Florida.

We met at Rookery North, and had no difficulty persuading Rookery golf pro Kyle Deas to join us.

For me, it was a rare opportunity to learn from the experience of playing with two professionals at the same time. It seems that this is what Oakley had in mind.

I have never been subjected to such an extended, persistent series of pointed suggestions that I would benefit from golf lessons.

It felt a bit like an intervention, not least of which because Deas agreed with Oakley.

“Have you ever had lessons? Did you ever think of having golf lessons? What’s held you back from golf lessons? You would really enjoy the game more if you took some lessons. You putt great, and you have a good grip, you just need to learn how to hit the long shots, which is much easier than what you already do well—“ and so on. 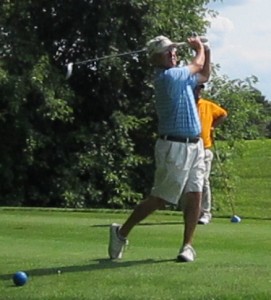 It’s nice they care, and I couldn’t disagree, especially after close observation of how well both of them play the game.

On the 360-yard fifteenth hole, Oakley had about 105 yards to the pin from the left center of the fairway. Just after he swung, Oakley barked “I tugged it,” as the ball landed a few feet left of the hole, spinning left to about 20 feet away. I’d have been ecstatic, but it wasn’t up to Oakley’s standards.

He dropped another ball next to the fresh divot. He then said out loud, “Take this 58-degree wedge and swing hard, but stay within yourself.” That next shot stopped about a foot from the pin, in a straight line from where he hit it.

Deas was equally impressive on that hole, for a different reason. His long drive landed in the right rough about 50 yards from the green, but low tree branches seemingly blocked his approach.

Deas hit a low punch that didn’t do what he wanted, which was to hit just in front of the green and skip to a stop at the hole. Instead, the ball shot across the green into thick rough above the hole, about 20 yards away.

Undaunted, Deas hit a flop shot that landed halfway on the green and rolled to a gentle stop about 15 inches away, for an easy tap-in.

Oakley’s precise approach, combined with his swing thought reminders as he took his second shot, was mirrored by many other shots.

Deas’ ability to recover for easy pars instead of bogeys was a distinguishing feature of his game.

It was also interesting to hear the two pros discuss their games as they played. Deas repeatedly admired Oakley’s tempo, while Oakley’s diagnosis of what Deas was doing with his swing made perfect sense.

This is not the first time anyone has suggested I could improve on my bogey golfer status by taking lessons. Most of my golfing buddies brought it up at one time or another.

However, the urging and encouragement of Oakley and Deas was enough to convince me.

A future column will discuss what happened next.

Desena finished low net individual with her 72, while Medd was first gross with an 86.

The Kings Creek Country Club Ladies 18 Hole Golf League played a T & F tournament July 31. Each golfer plays her own ball, but only holes beginning with a T or F (ten and fourteen, for example) count toward the total.

Prabhat Karapurkar was first in the third flight, followed by Terry Derville in second and Amy Micholas in third. Marilyn Hewitt was closest to the pin on the fifth hole, at 16’7’.