One of the pleasantly frequent aspects of walking into the pro shop at The Rookery’s South Course is the sight of Chris Osberg’s broad smile. 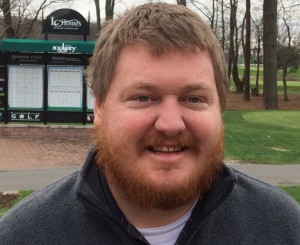 The young assistant golf professional knows the fundamentals of what it takes to succeed as a club pro, including the arts of diplomacy and customer relations.

As they say, he “gets it honest” as the son of a golf pro, born and raised near Lynchburg, VA, and hanging around the Winton Country Club in Amherst, where his dad Jeff worked.

Osberg first picked up a club at age 2 at the range, and competed in his first junior tournament at age 5. Golf has been a big part of his life ever since.

“When I would get into trouble, my mom would give me the option of either being grounded at home or at the golf course. She’s a great mom,” Osberg grinned.

He played well in high school, captaining his senior year and being named All-Area Golfer of the Year in 2006. Thanks to a family connection, Wesley College golf coach Rick McCall reached out to Osberg, and readily convinced him to play for the Division 3 team.

Osberg learned a big fish/small pond lesson in his first college tournament. In high school he was the one that outdrove the competition, but he was the short hitter in a match against Richmond. “Everyone else was driving it past me,” he said.

He continued to improve, however, winning four college tournaments during his four years at Wesley, and earning All-American honors in 2010.

Osberg left Wesley shortly thereafter, but remained in Dover, waiting tables and thinking about his next steps. At that point Rick McCall, Jr. suggested Osberg begin working for him as an assistant golf pro at nearby Wild Quail Golf & Country Club . Osberg seized the opportunity, and spent the next two years there.

He failed his first attempt at the PGA’s Playing Ability Test, but passed it on the second try. Osberg is currently engaged in the “bookwork” part of becoming a Class A PGA Professional, which focuses on marketing and management. Considering that most club pros’ working hours are spent in a specialized retail environment, that makes perfect sense.

Osberg explained that there are three levels to pass to complete the PGA process, and he is still at the first level. “For a while I wasn’t sure I wanted to do this, in part because golf is all that I’d ever been around doing.” However, he’s now committed to the process.

After Wild Quail, Osberg had a stint at Heritage Shores Golf Club near Bridgeville, working as the second assistant pro under Brooks Massey. Six months afterward, Rookery Head Golf Pro Butch Holtzclaw asked him to consider a move, and Osberg came to the Milton golf course in 2012.

“At The Rookery I’ve been able to build relationships, and those lead to giving lessons,” Osberg said. During the summer he can be found at the practice range with one of his students at least once a day, but doesn’t think much of winter golf lessons. “Folks can take the lesson, but the weather usually stops them from doing the practice sessions, and then they forget what they were taught.”

As for what he most often notices about his students, Osberg said, “Everybody tries to hit too hard. Tempo is one of the most important things about the swing. If the body is not well-connected, you just can’t hit the ball solid and well.” He said he tries to focus his students on making a smooth takeaway, building momentum through the swing.

Osberg is not a fan of gadgetry in golf instruction, relying on video, alignment sticks, and his ability to demonstrate both what should and should not be done. “I do some exaggerating, but that helps the student understand what’s really going on,” he said.

He remains competitively active when time permits, with occasional tournament play on his days off. Osberg has won a few pro-am events, and has also tried his luck on three occasions at qualifying for the United States Open. He came close at the qualifier held a few years ago at Back Creek, near Middletown, DE.

He and his wife Tami are much busier nowadays away from work, with their ten-month old daughter Lucy taking over their home in Lincoln.

Osberg is enjoying his time at The Rookery as he works to achieve his full PGA professional status. “It’s a nice mix of familiar faces and fresh faces, and I’ve learned an awful lot from Butch,” he said.