Kindness and Karma on the Practice Range

On a recent sunny, warm November afternoon, I drove up to Rookery South for a practice session on the range. 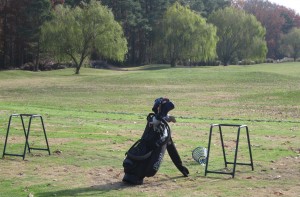 The practice range at The Rookery South course.

About seven other people were already at their stations, and after filling a bucket with yellow practice balls I took a spot in the middle.

Just left of me stood a gentleman wearing a PGA Championship hat from Baltusrol, and with a fully logo’d TaylorMade bag. He was working through several clubs, with a smooth, skilled swing.

The two men to his left were not, shall we say, at the same talent level.

The other man and I would hear a thump, followed by an earnest discussion of what might have caused a particularly awful result.

Then there’d be another thump, with the ball either taking off at odd angles or running along the ground.

This went on for several minutes. The other man and I would take a few swings of our own, and then turn back and watch the two friends struggle, especially when the taller one was swinging.

Finally, the gentleman put down his clubs and approached the duo.

“Hi, I’m Steve Smith, and I’m a PGA pro. Would you mind if I pointed a few things out to you?”

The two men were a bit stunned at first, but quickly agreed to hear what Smith had to say.

Over the next 20 minutes or so, Smith carefully explained the elements of a good grip, how to practice the finishing position and thereby improve the swing, how to stop topping the ball, and the basics of stance and ball position at address.

Sometimes he would demonstrate himself, and at other times he would physically place the golfer’s hands, arms, or legs in the desired positions.

At one point, in very polite but firm terms, Smith urged the taller golfer to practice by hitting five consecutive swings in the back yard, but with no ball—just hit a tee for five swings in a row, and start again if he missed one.

He also told them to do this five nights in a row, attempting to hit the tee and hold the finish. Smith said they would learn balance with this drill, which should help with making a more consistent swing.

While he gave this free lesson, I worked on my wedge shots, and periodically looked over to watch the teacher and his new students. The two men were paying close attention, and gave every sign they would practice exactly what Smith was preaching.

He took his leave from them, and resumed his place on the range next to me. I introduced myself, and we had a great conversation thereafter.

Smith has been the golf pro at The Golf Park at Rehoboth for many years, but the Park’s acreage off Shuttle Road near Kings Creek Country Club is now being converted into a new housing development.

In the meantime, the pros at The Rookery have kindly let Smith finish up some lessons at their range for his regular “book” of clients as the season winds down, and before he takes his winter break.

What I found refreshing was how Smith stepped up to help these two golfers, who obviously needed it. Smith laughed as he agreed with my suggestion that after watching them struggle, he couldn’t stand it any longer–he just had to go over to them.

“Golf is a very difficult game,” he said. “If we can make it a little bit easier, they’ll stay with it and not give up.”

Smith took no money for this volunteer effort. He also had no idea who I was when he walked over to help the two duffers. On the other hand, this was a potentially good example of enlightened self-interest.

And if this story helps Smith with his future “book” at a new golf spot, then this episode might also turn out to be an example of karma in action.

I’m glad I was there to see it happen.

Oakley ties for 2nd at event