It’s never a good sign when there are piles of snow in the parking lot of Wild Quail Golf & Country Club and you’re there for the first match of the Cape Henlopen High School golf team.

The leaden grey skies and light drizzle combined with temperatures just over 40 degrees to challenge both teams in the annual rivalry match between the Vikings and the Caesar Rodney Riders.

The Riders have had a bit of a streak going lately, and they kept it up March 27 with their 166-178 victory over the young Vikings. Mathew Miller shot a one-over par 37 on his home course’s front nine to earn medalist honors. 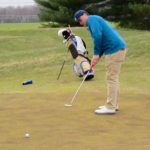 Nolan Brown led the Vikings with his 6-over par 42. “I was hitting my drives well. My short game’s terrible right now,” Brown said. He birdied the first hole, and parred the third, fifth, and ninth. He had a double bogey on the long par 3 eighth.

Dane Palmer was one stroke back with a 43. “I’m playing my irons pretty good, and my driver’s treating me well. My short game was not good today,” he said. Palmer parred the fourth, fifth, and seventh holes.

Saxon Kalb’s 46 was third best. “The par 3s killed me today,” he said, and he wasn’t kidding. On the 140-yard fourth hole, his scalded iron shot bounded across the green and into the pond behind it. His recovery chip after taking relief came up well short, and he ended up with a triple bogey. On the other hand, he parred the second and seventh holes. 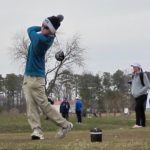 Michael Bollig completed the team scoring with his 47, including pars on the sixth and seventh holes. He credited his approach shots from 110 yards for his performance.

Brandon Mays-Harp and Ben Skelley both shot 48, just missing a chance to contribute.

Viking head coach Chris Krueger took some solace from the fact that all of his varsity golfers broke 50 in cold and wet conditions. As the weather warms up, the scores should come down.

In 2016 Wilson Golf ran a popular reality TV series on The Golf Channel called “Driver v. Driver.” Teams of would-be club designers competed to have their clubs selected by the sporting goods company for its upcoming 2017 line. I tested the winning design, an adjustable club called the Triton, during the 2017 PGA Merchandise Show.

At Demo Day at the 2018 Show I met Brad Syslo, a Wilson marketing staffer and 12-year veteran of the golf business. The company had just announced the judging panel for this fall’s second edition of “Driver v. Driver,” so we discussed a few of the other new club designs for the coming season. 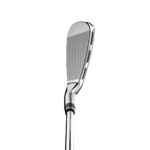 We first looked at the new Wilson Staff C300 iron, a cast steel design, as well as the Forged C300 set. In both cases, small slits called Power Holes are placed at strategic locations along the back and bottom edges of the club face, and filled with urethane. According to Syslo, the channels permit the “maximum deflection” to provide a larger “sweet spot” and therefore added forgiveness.

The Power Holes are visible along the top line of the C300 cast irons, which are designed for mid-handicappers and above. “We want them to see the technology and feel it when they use them,” Syslo said. For the C300 Forged irons, however, designed for highly skilled golfers, the channels are in the toe and sole, and are not placed along the top line. 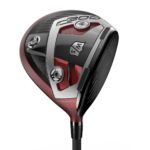 Syslo then showed me the Wilson C300 Driver ($399.99 SRP), which also uses the Power Hole slit/urethane technology. In addition, this club features three adjustable weight ports, installed at different locations on the club bottom. Two weigh 6 grams and one weighs 2 grams. Shifting the weights can help golfers correct for swing flaws, or help promote a desired ball flight pattern. The club’s loft (9, 10.5, or 12 degrees) may be adjusted up 2 degrees or down 1 degree, using what Syslo called their “fast fit sleeve.”

He said the club’s design is intended to produce a mid-launch trajectory with what he called “mid-spin” RPM numbers, in the “mid-2000s”.

To make sure the clubs are at the optimum settings for each golfer, Syslo strongly recommended using a Wilson club fitter for customization. The fitters use Flight Scope launch monitors during that process.

For golfers in the Cape Region, Wilson fitters can be found at Ruddo’s Golf in Ocean City, MD, or at Dick’s Sporting Goods in Dover, DE.