Day care on the LPGA Tour 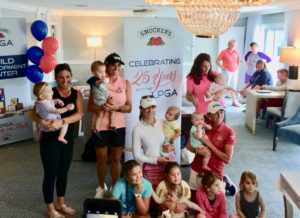 The J. M. Smucker Company is well known for its jams, jellies, peanut butter, and other foods, and rightfully so. It is less well known that Smucker’s is a major supporter for the mothers who play on the LPGA tour.

I attended a 25th anniversary celebration of the Smucker/LPGA relationship during the recent ShopRite LPGA Classic presented by Acer, held at the Seaview Resort in New Jersey. Sheryl Fish, the LPGA’s senior manager for partnerships, said, “They’ve just been phenomenal to work with.”

The Smucker LPGA Child Development Center began in 1993 as the first traveling childcare center in professional sports. The services are made available to players and LPGA staff. Credentialed supplemental staffers are added to the core group of three employees depending on the number children needing care during an event. The center will be open for 21 tournaments in North America in 2019.

The Seaview room was filled with kids ranging from infants to what appeared to be 10-year olds, all in good spirits and surrounded by their mothers and the day care staffers. The stoic “game faces” for which some players are famous were nowhere to be seen in that space.

I stepped out of the room for a few minutes to escape the joyful noise in order to chat with Bardine May of Bright Horizons. She has been with the LPGA day care system for 16 years, and is the manager. Bright Horizons provides day care services for the LPGA as well as professional sports teams and several hundred corporations who offer in-house day care for employees.

May outlined how a typical week goes for her and her charges. “We ship a truck filled with our stuff from one tour stop to the next, and usually are open beginning on the Tuesday morning before the tournament. When it’s a major we open up on Monday because of the practice schedule.”

May said players typically bring their child to the center about two hours before a scheduled activity, such as a pro-am or competitive round. The golfers are expected to retrieve the child within three hours of finishing the round, although May stressed that they accommodate special needs that go past the normal time frames. “The players might need to do some physio or do interviews. We will always work with them,” she said.

The LPGA and Bright Horizons coordinate with tournament organizers to locate safe and convenient temporary childcare sites. “The tournament also supplies the security,” May said, and that is a major consideration for potentially nervous mothers.

LPGA player and new mom Stacy Lewis is extremely pleased with the day care option for her daughter Chesnee. “There’s no way I would do this without day care,” she said. “The order of your life changes, but this makes it possible to keep playing. It’s great. They send me photos of Chesnee while she’s there, and that helps.”

May recognized some players face emotional challenges when balancing the unique way they make a living with the need for childcare. “If I can ease this part of their life I feel like I have really helped them, which is great,” she said.

The 25th anniversary celebration takes place during a bit of a baby boomlet on the tour. Eight LPGA babies were born in the last two years, and eleven mothers compete regularly on tour. More babies are on the way later this year from Sarah Jane Smith, Jackie Stoelting, and Brittany Lincicome.

From this grandfather’s perspective, those new babies will be just fine if and when their mothers choose to return to the LPGA.

The sessions include short game and putting fundamentals, the full swing, and on-course training. Lunch is included in the $125 fee.