A fitting way to improve your golf game (part 4) 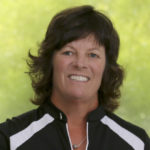 Becky Dengler has some strong convictions about golf, and particularly about putting.

A golf professional for over 25 years, she is a past Section Teacher of the Year in both the LPGA and PGA. As an LPGA Master and PGA Class A member, Dengler is in rare company. Less than 200 golf pros maintain memberships in both organizations.

Golf Digest, Golf Magazine, and Women’s Golf Journal have all ranked her among the best teachers in Delaware and the mid-Atlantic region. She is active with Delaware’s First Tee Program, and maintains a busy teaching practice at Porky Oliver Golf Club in Wilmington.

When she readily agreed to discuss putters as part of this column’s continuing series on club fitting, I assumed she would have some very definite ideas about this occasionally neglected part of the fitting process.

“It always amazes me. People spend 400 to 500 dollars on a driver they’ll use 14 times a game. But they’ll spend only 90 dollars on their putter and it’s a piece of crap,” Dengler said. Nonetheless, she sees some signs of progress among her junior players. “Some of the kids are already using Scotty Cameron [putters], so they’re already ahead of the game in my opinion,” she said.

Dengler believes in a few basic standards for putter design and set-up. “I’m more biased toward the [Ping] Anser style [blade] putters with their heel/toe weight distribution. I don’t see any reason for the high MOI types. Do you remember those 2-ball putters that were so popular on the tours? They were a flash in the pan. You don’t see them out there too often now,” she said.

At a minimum, putter heads should weigh 350 grams, according to Dengler. “You’re never going to find a good putter that uses a lightweight head,” she said.

Dengler wants her students to really feel the club head during the putt. Shaft length also plays a role in creating the right sensation. She believes too many golfers use putters that are too long for them. “You get more control with the shorter length,” Dengler said. 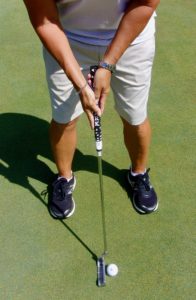 Her own putter is only 31 inches long. Dengler is five foot two inches tall in her stocking feet, and that putter length works well for her. She recommends most amateurs should try something in the 33- to 34-inch range instead of the 35” length often found in golf or retail shops. “I’m constantly cutting down the shafts. Then I add some lead tape to the head,” she said. “Keeping up the gram weight in the head is the focus.”

Dengler also prefers the putter to be slightly face-balanced, with a bit of toe hang. As she noted, most golfers have some degree of arc in their putting stroke. From her perspective the amount of toe hang should try to match the amount of arc the golfer uses in her stroke. “The idea is to match the face balance to the putting plane,” Dengler said.

Her own putter is a Tour Edge Exotics David Glod Tour Proto, DG v-1.1, a blade putter design that came onto the market several years ago. The shaft was cut down, and lead was inserted into the shaft cavity to restore the weight level she wanted.

Dengler is also a huge fan of Rosemark putter grips. The Thorn 1.25 model she uses is a standard size. However, Dengler said, “It’s more important to know what your hands are doing than the size grip.”

Reinhardt uses a blade-style SeeMore putter. “I don’t have to manipulate it during the stroke. I like to feel the weight of it while I’m putting,” she said.

Sounds like she is one of Dengler’s putting disciples. 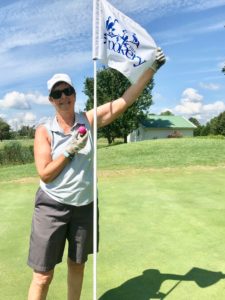 Congratulations to Debbie Ronemus for her second hole in one, made July 24 during Ladies Day at Rookery South. She used a 5-hybrid for the 95-yard shot on the par 3 9th hole.

The Kings Creek CC Ladies 9-Hole league played an individual T and F game July 24, in which the only holes for scoring purposes are those that begin with those letters, such as Two or Four. Deb Chase and Sandy Neverett tied for first place. Debbie D’Orazio came in next at third, with Mary Beth Merolla and Linda Miniscalco in a tie for fourth.