Not that far from what you should expect

Our foursome played a morning round Aug. 17, a day after weekend rains created a soaking wet Rookery South golf course. After standing in the first fairway to watch the other approach shots, I left half-inch-deep footprints – and I am not a big guy.

The wet conditions lengthened the course. Several of my drives “rolled out” a foot or two instead of my usual 10-25 yards of extra distance after the carry. Second shots on par fives suffered a similar fate. Most of my playing partners’ shots also failed to gain their usual roll.

At one point, I suggested to Bob Viscount that perhaps we should post our scores as if we played from the blue tees.

That didn’t happen, but I later reached out to Delaware State Golf Association Executive Director Laura Heien to see if our handicap scores would be affected by the wet grounds. The new World Handicap System gives the GHIN handicap system a chance to adjust posted scores based on playing conditions.

Laura responded, “The Playing Conditions Calculation [PCC] happens automatically within GHIN every night based on the scores posted that particular day. It is only applicable during the active season, so in our case that would be from April 1 to November 14.”

Heien noted, “A -1 adjustment means the course played easier, [and a] +1 adjustment means it was a difficult day. If there’s no adjustment that means the majority of scores posted were within the WHS’s range of ‘reasonable’ scores based on the handicap indexes of those who post scores on a particular day.”

In addition, the PCC can only be used if there are at least eight scores posted on a given day at a golf course.

She showed me which days the PCC was used at both Rookery courses. Between April 1 and July 18, the PCC only went into effect eleven times – five at Rookery North, and six at Rookery South, and only once on the same day, July 18. Of these dates, the PCC adjusted only twice because it was a harder day than normal. Even then, the adjustment was only +1. If conditions are bad enough, the PCC can go up to +3.

Heien said, “Across the state, we did see a jump in negative adjustments for easy conditions when many courses had raised cups and simply bouncing the ball of the cup was considered ‘holing out’. No surprise there that scores would be a bit lower than normal.”

And no PCC for us for our wet round, as it turned out.

KSI tournament still on the calendar

The 31st Annual Tournament remains on the calendar for Sept. 16 at Rookery North in Milford. Although major sponsors are already on board, such as WSFSBank and I.G. Burton & Co., several more sponsorship opportunities remain available.

Golfer registrations are limited to the first 25 teams. The entry fee covers the golf, cart, range balls, 2 mulligans, a putting contest, and a team photo. 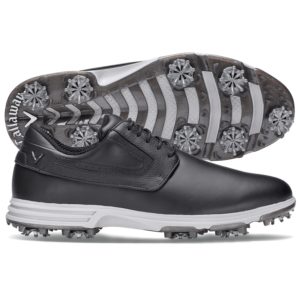 Thinking about golf shoes can trigger nostalgic memories for golfers for whom the phrase “OK Boomer” is not an insult – it’s just a statement of fact.

Most older golfers readily embrace the new technology for clubs and balls. However, they also fondly recall the distinctive sound of metal spikes on pavement from the soles of their heavy golf shoes.

Those days are gone, replaced by the market demand for more athletic and frankly better-performing designs.

At the PGA Merchandise Show last January I met Carey Langley, a sales staffer for Callaway Shoes. None of the shoes at his booth matched those recollections of days gone by. All of the display models were athletic designs, or what Boomers call “sneaker-style.”

Langley and I first looked at the new LaGrange 2.0 model, which has full leather uppers with interior waterproof protection called Opti-Dri. The insoles are made with polyurethane (PU) for cushioning.

The outsoles are made of thermoplastic polyurethane (TPU), creating what Langley called a hard shell. Horizontal strips are removed from the TPU material to provide flexibility, while retaining what Langley called “great horizontal stability.” He said recent Presidents Cup player and Farmers Insurance Tournament winner Mark Leishman wears this model, which retails for $149.95.

We also looked at the spiked Solana model, which retails for $89.95. Offered in spiked and spikeless versions, this shoe uses a rubber outsole below a microfiber leather upper.

Langley said Callaway sells more spikeless than spiked golf shoes, at what he estimated to be about a 55/45 ratio. He felt some golfers are fine with wearing spikeless models off the course.

It also saves them the trouble of changing shoes before heading home.