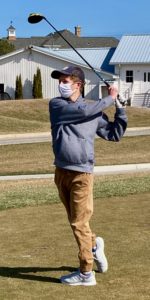 The Cape Henlopen High School golf team faced a few jitters but came away with a victory in its first match of the 2021 season, beating the Smyrna High Eagles 207-219 on March 22 at Rehoboth Beach Country Club.

Viking sophomore Ethen Mercer won medalist honors in his first-ever varsity match with a 44 in the breezy conditions of early spring.

“I was a little nervous at the beginning, but I began to relax after the first tee shot,” he said. Mercer’s 8-over round on RBCC’s front 9 par 36 included double bogeys on the first and sixth holes and a triple bogey on the eighth.  His approach shot to the par 5 ninth hole came from the first fairway but landed safely on the green for an eventual par finish to his round.

Junior Tommy Burn suffered three triple bogeys in his round, finishing with a 49. “I started out good, with three bogeys,” he said. “Then I kind of choked a little.” His troublesome holes included a drive into a pond on the sixth hole. Burn recovered with pars on the eighth and ninth holes.

“I didn’t let [the triple bogeys] get to me,” he said. “I’m actually okay with how today went.”

A 56 by Seth Reynolds and a 58 by Flynn Kalb, also juniors, completed the team scoring.

The three 11th-graders’ last varsity matches took place in 2019. The first-match nerves they displayed were likely enhanced by the fact that they missed last season’s competitive experience due to the pandemic.

Senior Forest Dotterer and sophomore Chris Williams also played their first varsity golf matches for the Vikings but did not score low enough to contribute to the four-player total.

“A win’s a win,” said head coach Robert Harrod. In his post-match talk with his team, Harrod said, “I saw good stuff from everybody. You’re good people. I’m pleased and we’ll grow from here.”

The Vikings’ schedule is still in a bit of flux. The previously scheduled March 26 match against Sussex Tech is now set for May 11 at Heritage Shores Golf Club. The squad has eight match days remaining for the season with several tri-meets on the current calendar, including a March 29 contest with Milford and Lake Forest at Jonathan’s Landing near Magnolia.

The Delaware State University women’s golf team returned to competition in late February/early March at the Kiawah Island Classic, an invitational tournament hosted by the College of Charleston at the golf resort in South Carolina.

“It was a good team bonding experience,” said Rick McCall, Jr., DSU’s head golf coach. “We had three freshmen play. Each one talked about how this tournament was worlds apart for nervousness compared to their junior golf events.” 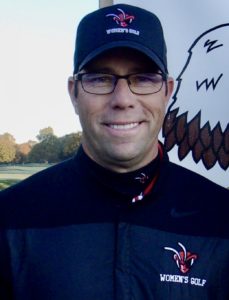 The Hornets had not played any tournaments for over a year because of the pandemic, missing their spring 2020 and fall 2020 competitive opportunities. Two players from Thailand did not travel to the United States last fall but returned for this spring semester.

McCall was not concerned about the Hornets’ overall performance. “There were some pleasant surprises, and we weren’t last,” he grinned. “I know they played well under their capability, but that will change. They’ve had some real challenges. Covid meant there were no live classes, and the stress levels for all of them were higher. The lack of connection in the usual ways in classes meant that their friendships and contacts were only with their teammates and few others,” he said.

Collegiate sports pandemic protocols are also challenging. Each team member is tested three times each week, on Monday, Wednesday, and Friday. Each practice includes screenings by the DSU trainers, with temperature checks and “the usual” questions about potential symptoms.

McCall gave an example of how these rules recently worked. The team could not fly to Charleston for the Kiawah event and took a bus. The bus had to leave at 5:00 a.m., but only after a 4:00 a.m. rapid test of all of the travelers, including the bus driver. This came about twelve hours after a Thursday evening Covid test.

“We ask our players to do everything in their power to limit their potential exposure,” McCall said. In addition, he noted, “Their time management skills are really put to the test. Golfers at this level need to maintain a good work ethic and their G.P.A., and show they are committed to playing up to their potential.”

The Hornets have a good spring schedule, including a trip to Virginia March 28-30 for the William and Mary Intercollegiate and an April 1-3 visit to Annapolis, MD for the Navy Invitational.

The squad is also set to play the Women in Golf tournament in Atlanta, GA April 12, and complete the 2021 season with the Minority Championship at Sawgrass in Florida May 1-3. 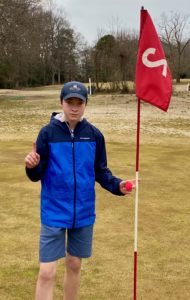 Jacob Gabbard and his first hole in one

Congratulations to Jacob Gabbard for his first hole in one, made March 17 on the second hole at Midway Par 3. The 13-year-old Beacon Middle School student used his sand wedge at 85 yards and the ball went in on the fly.