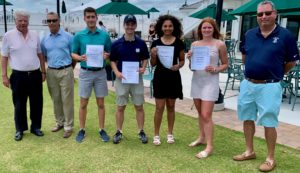 Each spring a committee reviews the applications. Scholarship winners demonstrate high academic achievement, community service, and a love of golf.

Benjamin Mayhew of Middletown, DE won the R. Gerald Medd Award, worth $5,500 per year or $22,000 total. Mayhew is a legacy Fund recipient. His father Kyle won a scholarship in 1990 and his brother Tyler received one in 2018.

Since 1986 the Fund awarded over $1.4 million to recipients from throughout Delaware. To sustain the program the DSGA runs a major fundraiser tournament at Rehoboth Beach CC. This year’s event is currently scheduled for Aug. 30.

For more information about the Fund or to make a contribution, go to http://www.dsga.org/junior-golf/scholarship-fund/.

When pandemic restrictions eased, golf rounds increased significantly. Golfers came back to the sport in unexpectedly large numbers, according to the National Golf Foundation.

E-Z-GO, a division of Textron Specialized Vehicles, had an “interesting year,” according to spokesman Brandon Haddock. 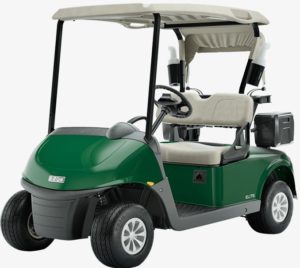 “The [2020] spring was tough,” he said. “We had supply chain impacts and challenges with logistics and raw materials for a while.”

In 2018 I toured the E-Z-GO factory in Augusta, GA, shortly after the company moved to a large facility that appeared to be larger than necessary. Accommodating COVID-related restrictions and regulations used some of that extra space, Haddock said.

He said Textron leased out larger fleets than expected, in part because of rules changes that limited cart use to singles. That came with its own problems, however. “Increasing the number of carts can have a dramatic effect on operations,” Haddock said. “At many golf clubs, the barns can’t accommodate a larger number of vehicles.”

The updated RXV ELiTE lithium battery powered cart, introduced at the 2021 virtual PGA Merchandise Show, resolves some of those concerns. “It continues to do extremely well for us,” Haddock said.

The longer lasting running charge the lithium system can hold “eliminates the anxiety of getting two rounds in per cart,” he said.

The new ELiTE carts can be outfitted with an optional USB port and an Insider Bag that provides over 36 liters of storage under the seat. “We know that golfers like to bring more stuff with them. The new Bag option supports that lifestyle,” Haddock said.