The Test of a Professional Golfer (part 3 of 3) 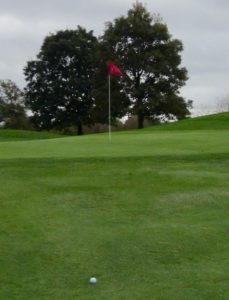 Par-saving recovery skills from just off the green are critical in order to pass the PGA’s Playing Ability Test.

When I drove to Ocean Pines Golf Club Oct. 12 to take the Professional Ability Test, I switched my car’s wipers from low to intermittent and back in the predawn darkness. A heavy mist hung over the area, following steady rains the day before.

After paying my entry fees, I met Paul Caras, a former golf pro and friend of mine from The Rookery. He had volunteered to be my caddie and watched me warm up before our 7:40 a.m. start.

I joined Mike Mikuta, a young assistant pro at Bayside Resort, along with Louis Limber, a restaurant manager at Kava in Olney, MD. Limber kept the traditional long hours of restaurant staff, juggling those duties with minding a 2-year-old at home. This was Makuta’s second attempt, and Limber’s fifth.

The course remained saturated, and the light winds would not dry it out. Any distance with my clubs had to come by air. There would be little if any roll to help.

With my handicap index of 7.0, I had no illusions about my ability to pass the PAT. After the first four holes, any remaining hopes about that possibility completely vanished.

I steadied a bit after that wretched start, with a single birdie and a mix of pars, bogeys, and a few annoying doubles. Under the circumstances, I was pleased with my par on the 36th hole. I finished 26th in the field of 35, well out of passing range.

Limber struggled with his driver, requiring too many attempts to recover from mishits.

Mikuta finished the day with a 160 total, four strokes over the limit. From my perspective, he would have easily passed if he had played in good weather. A few mistakes in handling wet turf made the difference.

After the round I chatted with Ocean Pines head golf pro John Malinowski, who has administered the PATs at Ocean Pines GC and Great Hope GC for the last five years.

“We try to work with UMES and make sure there’s at least two per year within a relatively short distance of the university so that the kids can come and try to qualify. These guys are in school, so it’s tough for them,” Malinowski said.

His club supports running the PAT on the course. “My boss and everyone here are interested in seeing the younger pros come out” he said. “They like seeing the older guys come out trying for it. We’re a good facility for it. It’s a good, old school golf course. It’s not bust it, and find it, and hit it again.”

Malinowski recognized the day’s challenging playing conditions, which included water tracks for nearly every putt. “The worst part is that you can play in the rain, and everything can be fine, but when there’s mist like that, that’s worse than rain because you get those rooster tails all the time. The water just sits on top of it and never gets down into it,” he said. “And then you’re popping at it and not making a stroke at it.”

He also noted the day’s physical demands in addition to its mental challenges. “The ground’s squishy because it rained all night. We didn’t get a ton of rain, but you still have that misty stuff all night long, so it’s a bit softer, like walking on beach sand for a long amount of time. So, you have to fight fatigue, then you get a couple squirrely shots,” Malinowski said.

On the day after the PAT, Mikuta played the Renditions golf course in Maryland with his dad. He didn’t finish. “I felt mentally beat,” he said. “Don’t take the PAT in extremely wet conditions on a course that doesn’t drain easily.” Then he laughed. “You had to hit the fairways, and even then, you sometimes had to club up two clubs” because of the wet turf and lack of roll.

Mikuta thought the more times he played the PAT the easier it would become, because he would know better what to expect. “The short game is key. You really need to practice it beforehand.”

“I was fortunate both times to have good people to play with. That helps,” Mikuta said.

Hugh Ellison III played best of everyone at Ocean Pines with his even-par 144. Three of the other five golfers who passed are in the Maryland-Eastern Shore PGM program: Michael Davis, Montaevious White, and E. Alexander Brooks. Matthew Pica and James Sams completed the passing group – which just happened to be 17% of those playing.

Best wishes to Mikuta, Limber, and the UMES golfers when they try again to pass their PAT.