Two aces in one round at American Classic 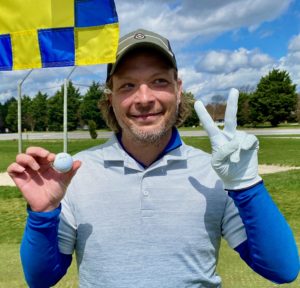 It is always a good idea to play golf with your friends. They can be very handy as eyewitnesses.

On April 9, Jason Leiggi of Milton was playing what he thought would be a quick nine holes with his buddies Alec and Clay Foltz at American Classic Golf Club off Postal Lane. Leiggi picked a 5-iron for his shot to the 160-yard par 3 fourth hole, going up two clubs from his normal selection because of the wind and the cold.

Naturally, he thinned his shot. The Snell MTB Black ball rose no more than 10 feet high until it slammed into the berm in front of the green. The ball bounced up and over the berm.

Leiggi did not see it go in the hole, but his friends did.

After the celebration and their finish on the ninth hole, the group decided they should play a full 18, and walked over to the 125-yard par 3 first hole to play their tenth.

Leiggi’s shot flew over a small rise in front that once again blocked his view of the ball’s path.

Once again, his friends saw what he didn’t. The ball rolled into the cup for Leiggi’s second ace of the day and his second in his two years of playing golf.

Leiggi, an IT manager for Accenture, said he has a non-golf membership at Kings Creek Country Club. He and his friends play a variety of courses in the Cape Region.

If this kind of performance continues, perhaps Leiggi should consider a membership upgrade.

After suffering three close defeats before spring break, the Cape Henlopen High School golf team returned to the winning form it enjoyed in the first few matches of the season.

On April 26 the Vikings defeated the Laurel High squad 174-215 on the front nine of Rehoboth Beach Country Club, and won by forfeit against a solo golfer from Woodbridge High, 174-300.

Cape junior Ethan Mercer won his third medalist honors for the season with his four-over par 40. Freshman Jacob Gabbard contributed a fine 42 to the team total, while noting an issue or two with course management that might have lowered his score.

Co-captain Tom Burn struggled with a few holes but finished with a 44, while fellow co-captain Seth Reynolds completed the team scoring with his 48.

Head coach Rob Harrod said he was pleased with his team’s return to winning. “They continue to improve as a team and we are looking forward to even better scores as we go deeper into the season.”

Senior Hannah Lydic earned medalist honors with her 36 on the club’s front nine, with Sawyer Brockstedt finishing two strokes behind her. Sarah Lydic posted a 42, with Tyler Healy completing the team scoring with his 47.

The Delaware State University women’s golf team joined the Southland Conference in 2021. The Lady Hornets traveled to the Panorama Golf Club in Conroe, TX April 18-20 for their first appearance in the conference championship, finishing in third place.

Anna Ferreyra-Heit and Nattavadee Khunsri tied for 4th place overall, best among the Hornet contingent. Their high finish earned all-Conference honors for the pair. Ferreyra-Heit’s 73 in the final round was third best for the day, with Khunsri’s 74 taking the fourth spot.

The team from Augusta University in Georgia won the tournament, with Incarnate Word from San Antonio, TX taking second.

The Hornets’ next scheduled event is the Women in Golf Championship April 25-27 in Atlanta, GA, followed by the PGA Works Minority Championship May 1-4 in Philadelphia.

The Rookery is hosting six Demo Days in May and early June, with required appointments to handle the likely crowd of golfers interested in testing the new products.

Each session runs from 10:00 a.m. to 2:00 p.m., beginning with Cobra and Ping on May 7. TaylorMade reps will be there May 13, with Callaway coming to the Rookery range May 14. Mizuno is scheduled for May 21, with Titleist finishing the demo day spring cycle June 4.

In the first division, Karen Feuchtenberger won the front nine, with Wendy Michaelson taking second. Linda Kaufman won the back nine, with Brenda Joyce just behind her. Peggy Clausen won the overall segment, with Reta Rose Frampton in second.

Sue Ahern won the first flight, with Diane Braver in second and Ann Reid in third.