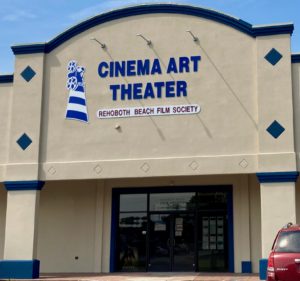 “The Phantom of the Open” is based on a true story. Maurice Flitcroft, a shipyard worker in Cumbria, England who had never played golf, decided he should enter the 1976 British Open qualifying tournaments. His unbounded optimism was not matched by any actual talent for the game. Through sheer audacity and a bit of luck, he set an Open qualifying record for the worst score ever.

Flitcroft’s continuing efforts to compete in a British Open becomes what reviewers have called “warm-hearted,” “laugh-out-loud funny,” and “way above par.”

Mark Rylance plays Flitcroft, with Sally Hawkins as his wife. Rylance won an Oscar for his performance in the thriller “Bridge of Spies,” and will be familiar to PBS watchers for his portrayal of Thomas Cromwell in “Wolf Hall.”

For tickets and showtimes, go to RehobothFilm. com. Ticket prices are $9.00 for Film Society members and $11.50 for future members. The theater is at 17701 Dartmouth Drive, Lewes, in Dartmouth Plaza behind the Lewes Wawa.

In the 9-hole coed 12 & Under division, Sammie Metz of Rehoboth Beach finished in 9th place, with Jack Tunnell of Lewes in 12th. Ellie Walls of Millsboro came in 14th.

The community of Plantation Lakes in Millsboro is gathering again for a charity fundraiser Friday, July 22. The rest of the Cape Region is invited.

The Chris O’Halloran Memorial Outing honors the first homeowner on the Plantation Lakes Board of Directors. O’Halloran was a first responder to the September 11 terror attacks, a retired employee of the Port Authority of New York/New Jersey, a Navy veteran, and an avid golfer. He passed away from lung cancer in June 2019.

The fundraiser supports Home of the Brave, the homeless shelter for veterans near Milford.

The tournament is an 18-hole scramble with a 9:00 a.m. shotgun start. The $125 per player entry fee covers the golf, a custom gift, a lunch banquet, awards, and the donation.

To play the event, contact Plantation Lakes golf pro Ian Madinger at imadinger@ theiconteam.com. To sponsor a hole or inquire about other sponsorship opportunities, contact Kathy O’Halloran at ohallorankathy@ yahoo.com.

Bounce the bugs away

The 2022 ShopRite LPGA Classic presented by Acer returned to its early June calendar slot, after two years in October.

That meant the spring gnats and mosquitoes were happy to go after players, caddies, and fans on the Seaview Resort’s Bay Course.

These pests are not a big deal if the wind is up, but if it’s calm, they make their presence known immediately and often.

At the practice putting green before the first round, I watched caddie John Easley stuffing a bit of cloth inside his baseball cap and return the cap to his head.

It was a dryer sheet.

“I was told to do this” as a bug repellant, Easley said. He added, “We’ll see how it works,” and then grinned.

The upstate South Carolina native, who was working for LPGA rookie Ruoning Yin of China, had never heard of this little life hack. Neither had I, so I did some checking.

One active ingredient used in Bounce or other sheets, linalool, is also used by plants such as lavender and basil to ward off insects. The sheets also include beta-citronellol, the active mosquito repellant usually associated with citronella candles.

You learn something every day.