A fitting way to improve your golf game (part 3) 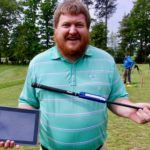 I tested three of my own swings on the Analyzer a few days later with the help of Rookery South club pro Chris Osberg. I used the Mizuno 6-iron with its attached measuring device, and the data uploaded to a Rookery iPad. The analyzer provides 6 reports that suggest the golf shaft and lie angle that helps create the best launch conditions for the way you swing.

Some of what we learned was a bit surprising.

The data showed that my 6-iron swing is over 76 mph, not bad for a senior golfer. The next measurement was for tempo – how quickly a golfer transitions from the backswing to the downswing. My number was 5.67, faster than average. That suggests using a heavier and/or stiffer shaft to assist in timing.

The Analyzer data also suggested my shaft lie angle should be 1 degree upright compared to the stock option, but at Mizuno’s standard club length.

Both shafts are steel, but I have used graphite shafts for years. The first graphite model to appear on the Mizuno list was in 12thplace, the UST Recoil 95 R, whose weights vary from 90 to 96 grams in the club set. I currently use UST’s Recoil 660 F3s, which weigh 71 grams.

Mizuno stresses that its recommendations are just that – the next step is to test the various options and see how they feel and perform.

(Part 4 of this series will continue in an upcoming column).

Associa is a community association and property management company that operates in the Cape Region and Ocean City, MD area. It also runs a charity called Associa Cares, which provides disaster relief for families and communities.

The 9thAnnual Fore! Associa Cares Golf Tournament takes place Sept. 12 at Bayside near Selbyville, and the company is actively seeking sponsors. Support levels are available in a wide variety of options, from a Wrap Party Food Sponsorship for $3,000 down to a placement of your business card in the event booklet for $100.

The Center is also seeking sponsors and auction items for the event, which supports the long-running senior service facility.

For more information, contact the Center at 302-227-2055 and ask for Linda or Bobbie, or stop by at 11 Christian Street in Rehoboth Beach.

The Mulligans Pointe Ladies played a Throw Out game June 4, where the worst three scores are tossed from the total. Nancy Mahwhinney won first place, with Cathy Macklin in second and Carol Love in third.