A good fit at a good price 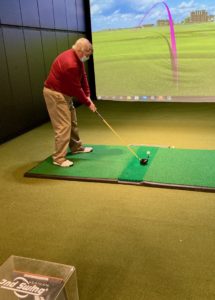 Mark Rath being fit for a lightly used driver at the Second Swing store in Wilmington, DE

This option does not require spending top dollar on the very latest stuff. With a little experimentation you can find a good fit at a good price.

In early February I accompanied Mark Rath, a golfing buddy, as he traveled to the Second Swing shop on Concord Pike outside Wilmington to see about upgrading his old driver.

Rath retired a few years ago from a long career in the container industry and moved to the Cape Region with his wife Jane. He began playing golf seriously around age 12 and worked as a caddy before and during his undergraduate days at Villanova. He golfed overseas as a young Navy officer and continued his love affair with the sport throughout his long business career.

He currently carries a handicap index of around 9.8, but when playing with him there are occasional glimpses of his former 3+ skills. This usually happens when I mistakenly think I have him beat on a given hole.

Last season Rath struggled a bit with this club. Erratic drives put pressure on the rest of his game. He finally succumbed to my suggestion that it was past time for an upgrade, especially if he planned to continue playing dozens of rounds each year.

We met with Second Swing fitter Tyler Fuhrman, who asked Rath to warm up with his 7-iron and then establish a baseline with the R580.

In their preliminary conversation, Fuhrman confirmed that Rath sought an updated driver but was happy to test recent but not the latest models. Second Swing’s large inventory of lightly used models would fit the bill. The fact that both Rath and Fuhrman are brand-agnostic also helped.

Rath hit some nice shots with his 7, matching his mid-season form with a 77-mph swing that carried the ball just under 150 yards. 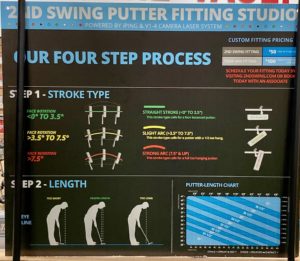 His best drives came with a Ping G400 Max 10.5-degree driver with a Ping Alta R flex 55-gram shaft. Rath’s attempts with this 2018 design generated far more uniform results in carry distance, club speed, and swing efficiency. This made for an easy decision about making the purchase, with significant savings over 2021 model pricing.

We also spent time in the Second Swing putting area. Rath’s consistency problems with his old driver had also shown up on the putting green, so he tried a few putts under Fuhrman’s watchful eye. Rath and I chatted about it there and on the way home. He agreed to try a Rife putter I tested and reviewed a few years ago.

He liked how it felt but thought the shaft was just a bit too long for his swing. I urged him to tinker with it. Rath cut ½ inch off of the steel shaft, regripped the putter with a spare grip he had at his home workshop, and watched a few putting videos on YouTube.

The results are promising, with more tap-ins and fewer 4- to 5-footers for par. His drives on the golf course are a significant improvement as well.

Rath’s successful club fitting experience makes me feel a bit like Dr. Frankenstein – but in a good way.

A Cape Region fantasy football league is holding its first Four the Kids golf fundraiser April 10 at Mulligan’s Pointe Golf Club in Georgetown. Proceeds will go to the Ronald McDonald House of Delaware.

The shotgun start for the scramble format event begins at 8:00 a.m. The $100 entry fee covers the golf and lunch. Prizes are available, as are several sponsorship opportunities from $150 to $400.

At a Cape High golf team practice last week, I walked up to a promising player about to hit a 100-yard approach from the left side of the par-5 fourth fairway at Rehoboth Beach Country Club.

This hole features a large pond right of the fairway from about 130 yards out to beyond the green’s right edge.

I leaned in and said, “Don’t even think about all that water. Don’t give that big pond another thought.”

He turned to me with a grin and said, “That’s what my grandpa does to me when we play.” He turned back to his ball, and hit a fine wedge shot to the middle of the green.

Glad to see he is well trained about gamesmanship.