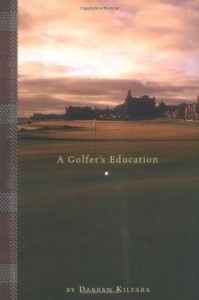 Through an odd circumstance of timing, this review follows on the heels of another book recounting a year in the life of a golf writer. Unlike James Dodson’s midlife ramble in The Dewsweepers, however, Darren Kilfara’s memoir is of the coming-of-age variety.

Kilfara was a student at Harvard and member of its Division I NCAA golf team, and an apparent master of working the angles. For example, during an internship with Golf Digest he frequently took advantage of the magazine’s arrangement with nearby Yale University to play the school’s storied golf course.

He also figured out how to use Harvard’s academic year abroad program for the sake of golf. Kilfara convinced the school’s History Department chairman to approve his departure for a pair of semesters at St. Andrews University. Golf Digest also chipped in with an assignment or two to help offset the additional cost. The deal required Kilfara to research and write not only about St. Andrews, but also several of the less well-known courses dotting the Scottish landscape.

In other words, despite his apparent youth and inexperience Kilfara cleverly devised the perfect golfer’s education.

Of course, he learned about much more than golf, and like any young man, he needed the additional course work.

Kilfara also gives the impression that he was a fairly indifferent scholar while at Harvard, and carried that attitude with him overseas to the storied university town. That changes, as Kilfara explains the differing approach to college education in Scotland, which demands a more mature approach from its students along with a lighter course load.

Kilfara also gives the novice bettor a useful primer on the many ways British bookies can separate a fool from his money. Widespread legalized gambling is possibly among the more overlooked differences between Great Britain and the U.S., and Kilfara’s misadventures in trying to score a big hit on a European Tour event were illuminating.

The title of this book is only a little misleading. A golfer does receive an education that is retold nicely in this little memoir. Any assumption that the education was limited to golf, however, would be false.