Death With All the Trimmings

In addition to her problems out on the course, Cassie Burdette has a way of running into dead bodies at inconvenient times–as if there is a convenient time for that to happen. For example, in Buried Lie, a member of Burdette’s amateur foursome shows up dead shortly after the Shop-Rite pro-am outside Atlantic City. In Final Fore, the last book in the series, a promising young pro dies during an event at Mount Holyoke College. 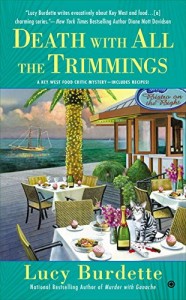