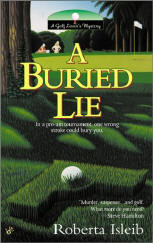 Roberta Isleib is a smart woman, and I can prove it.

First, she’s a clinical psychologist. There’s one of them in my family, and if she’s anything like him, then it’s obvious she’s no fool.

Second, she’s an avid golfer, which shows her brilliance at selecting a lifetime sport to love.

Third, she likes to write mystery novels and she’s good at it. Writing genre fiction is neither a viable sideline avocation nor a hobby for the weak of mind.

And fourth, she figured out how to combine all these talents and earn herself a nice little tax deduction for research expenses at the same time.

As for that last bit of proof, one can only make a respectful bow.

Isleib’s newest Cassie Burdette novel is the second in this fine series. In the origin story, Six Strokes Under, Burdette becomes involved with a murder just as she’s trying to qualify for the LPGA.

This time, Burdette’s off-course adventures take place during her initial season on the LPGA Tour, as she manages to qualify for the Shoprite LPGA Classic, outside Atlantic City, New Jersey.

Guess who played in the Shoprite pro-am event?

Guess who accurately captured the look and feel of the event, even down to the heat, humidity, and greenhead flies that grace the wetlands to the west of the East Coast gamblers’ paradise?

Guess who can now justify all the expenses involved with playing in the pro-am as part of her preparation for this new novel?

I rest my case.

Burdette’s natural curiosity is the fundamental character trait that drives the plot of the new novel. It’s also the reason she manages to put herself in harm’s way.

The rookie pro is paired up with an amateur foursome for the Shoprite pro-am, all of whom work for the same pharmaceutical company not far from Atlantic City.

In much the same way as those who plunk their dollars down at the blackjack tables, high profits in the drug industry can also be a high-stakes gamble. As they play with Cassie, each amateur shows the strain of the team’s latest efforts to bring a new drug to market that would treat Alzheimer’s’ Disease.

The fact that the female member of the group shows up dead a short while after the pro-am event doesn’t help matters.

Burdette befriended the woman during their short time together, and can’t stand to let the Atlantic City police handle the investigation without her help.

The detective handling the case would rather not have Burdette involved, for obvious reasons.

Burdette, on the other hand, is more stubborn than cooperative. She even manages to enlist her roommate/caddie Laura and her sometime golfing shrink Joe Lancaster into helping solve the mystery behind not only the amateur’s death, but the additional victims following thereafter.

Along the way, of course, there’s the small matter of playing in the tournament, making the cut, and trying to show that it’s no fluke that she’s on the LPGA Tour. In addition, there are the recurring romantic entanglements with the man for whom Burdette former caddied on the PGA Tour, as well as intriguing romance possibilities with Lancaster.

Burdette’s continuing family conflicts with her mother and stepfather also carry part of the story forward, and while showing Isleib’s professional expertise with that messy element of family relations.

The plot twists also include a short introduction into the Atlantic City escort business, which may be completely fanciful as far as I know. In addition, Isleib gives her readers a realistic, mostly sympathetic treatment of a former PGA Tour player for whom Burdette discovers a connection with the dead executive, working at a nearby golf course that’s nearly gone to seed.

The finish to the novel is a bit abrupt, but just outlandish enough to both amuse and satisfy.

I’m sure Isleib is smart enough to know she’s created a fun new mystery heroine in Cassie Burdette, LPGA player and amateur detective. Judging from the response to Six Strokes Under, I’ll bet that mystery lovers who play golf will also line up for this latest effort.