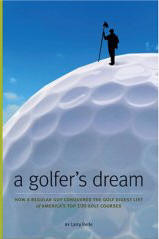 I never thought I would refer to this seminal study of supply side economics in a golf book review, but there you go.

As Gilder explained, capitalism is based on the assumption that a person will “give” something of value to others, without any more than the hope of a return on that gift. This was called potlatch in Native American cultures, but it continues today.

Capitalism calls for people to risk their investment in the hope that someone will take advantage of their offer, leading to a profitable result for all concerned.

Berle’s book follows his unusual golfing odyssey from the first few courses he could easily play, such as Pasatiempo and Pebble Beach, until he finally completes the list with a round at The Atlantic Golf Club on Long Island. He keeps a detailed list of everyone he contacted for access to the private clubs on the list, and describes how they either agreed or failed to respond.

As he continued, he kept the ever-growing list of contacts well informed of his progress. His network expanded as his list of courses played grew.