Ben Skelley’s 42 won medalist honors May 14 at Heritage Shores as the Vikings defeated Woodbridge, 179-218. Senior Dane Palmer was second for Cape with his 44, with Tommy Burn posting a 46. Reed Jones and Quinn McCullough tied for the fourth scoring spot with 47s.

The Vikings also played well during a successful tri-meet against Milford and Delmarva Christian May 8, winning 170-204 and 170-200 respectively.

The Vikings finished 11-4 for the season, and next play the Henlopen Conference Championship May 21.

A fitting way to improve your golf game (part 1)

It is so much easier now to tailor your golf equipment to your abilities. An option that was once thought to be limited to golf professionals is now wide open for golfers of all abilities.

Lewes resident Brad Cowen is a new and enthusiastic convert to the idea that regular golfers should be fitted for their clubs. “It was great. I’ve never been fitted before. I was always a Dicks Sporting Goods kind of guy when it came to buying clubs,” Cowen said. “It was nice to be able to try each one of the clubs on the same day.”

When I met Cowen, he was finishing up a fitting and purchase of a new set of Mizuno irons from Henry. “The Mizunos just felt right,” Cowen said. “It’s a pretty huge purchase but it’s worth it not to be frustrated. You can really feel the difference.”

Part of Cowen’s fitting included trying several different shaft models for his new clubs. He said the different options altered how he perceived the clubhead weight.

(Part 2 of this piece will appear in next week’s column). 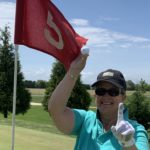 Congratulations to Barbara Brewer of Lewes for her hole in one May 9 at American Classic Golf Club. Brewer used her trusty Ping 5-iron and a Nike golf ball she bought during the 2011 U.S. Open at Congressional for the 110-yard shot on the par 3 fifth hole.

She said she was disappointed that no one was at the club’s bar when she finished the round, because she was ready to buy some drinks.

Perhaps her friends can convince her to give them a rain check (along with an adult beverage) to celebrate her triumph.

Entry fees are $150 per player or $600 per foursome, and cover the round, practice range, drink tickets for the refreshment cart or cocktail hour, a box lunch, and dinner. There are several prizes as well as on-course competitive events during the tournament. A $5,000 putting contest splits the take between the winner and the Oak Orchard Boys and Girls Club in the winner’s name.

Registration is available at longnecksunriserotaryclub.com/projects-2/.

The Fraternal Order of Police Lodge #2 is holding its second annual charity golf tournament June 14 at Mulligan’s Pointe in Georgetown. The event supports the Health and Welfare Fund and Concerns of Police Survivors.

Tee off for the scramble shotgun best ball format is at 9:00 a.m. The $95 per player fee covers the cart and round, pre-tournament breakfast and after-round luncheon, along with auction and door prizes.

For more information, contact Robert Schappert at 410-271-5480 or rschappert@verizon.net.