Spring sports in the Cape Region are always hostage to the vagaries of late winter conditions at the start of the season. This year’s edition was no different.

Thanks to yet another burst of 5 to 6 inches of white stuff, the official first week of practice for Cape High teams was forced indoors. The last time that many Cape athletes were all in the gym together, it was probably part of a school assembly, and in the old high school at that.

Head Coach Claudio Smarrelli was still laughing about his first exposure to indoor golf practice when we chatted a week later. “We’ve never had to do that before,” he said. “There were nets up, and baseballs and tennis balls were bouncing everywhere. We were in the back section, and had the kids hitting these little wiffle balls with their golf clubs. Those balls were all beat up by the end of the week.”

Smarrelli was his usual confident self when asked for an early assessment of the young Vikings. “This is a promising team. Everybody but two came back from last year, and there’s a bunch of new players. We had 26 sign up originally, and it looks like we have at least 21 so far. This Wednesday is the deadline for all the required forms, so we’ll see what happens after that,” he said.

As before, the local Cape golf clubs are generously helping out, often by making their courses available to the team. Varsity practice will primarily take place at Rehoboth Beach Country Club, where the home matches will also be conducted.

Smarrelli said they appreciate and will be enjoying the hospitality of the Midway Par 3, as well as the newly re-opened American Classic golf club off Postal Lane. “We’re going there this Friday, and meeting up with Ty Mayers. He has a good program lined up there for the players, and there’s also a special deal they’ve set up for the kids,” Smarrelli said.

Sam Purple, a former Cape Viking golf standout, is back again for her third year as assistant golf coach. Now a teacher for the Cape District, the young golfer has an easy way of connecting with the squad, which according to Smarrelli has “more ladies this year” trying to make the team in one of the few coed scholastic sports programs in Delaware.

Purple said, “We have a nice bunch of golfers coming out. I think there are fourteen juniors, and they’ve all played golf before. There should be some good competition for spots,” she said. 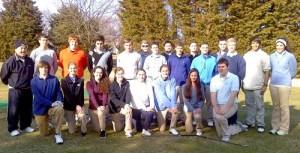 I asked the team to line up for the traditional opening of the season group photo, and Purple graciously agreed to write down the names for the caption. However, after I took the photo, Purple said some of the kids had shifted positions after she wrote them down.

The first match of the season will be a home match March 26 against Polytech High School, weather permitting of course. The Kent County vo-tech has fielded some very good squads in recent years.

There are fourteen matches in the Vikings’ tentative schedule, followed by the Henlopen Conference tournament and the two-day state championship, held May 27 and 28 at a location that has yet to be named.