A scheduling snafu led to a tri-meet May 3 at Rehoboth Beach Country Club among Cape Henlopen, Woodbridge, and Sussex Central. The Vikings won both contests, 177-213 (Sussex Central) and 177-266 (Woodbridge).

Matt Zehner won medalist honors with his 41, which included four pars and a double-bogey. “The holes into the wind were hard, and the ones with it were easier,” he said.

Nolan Brown shot a 44, and blamed his putting. “I had at least four 3-foot gimmes that I couldn’t make.”

Dane Palmer and Mike Bollig tied for third and fourth spot for the Vikings with 46s.

The Vikings traveled to Wild Quail CC May 9 for a match against Polytech, and squeezed out another victory, 170-173. Zehner again won medalist honors with his 36, with Kalb taking second for Cape with his 42. Palmer shot 45, with Brown’s 47 completing the team’s score, its second-best of the year.

Cape head coach Chris Krueger said he was “very proud of the team”. 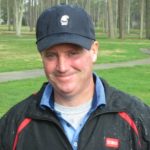 In early April I met Mike Maney, the course superintendent for Rehoboth Beach Country Club, as he and his staff were putting the finishing touches on an extensive aeration of the course’s greens and approaches.

This work was in addition to aeration done earlier, called deep tine. For that work, holes roughly ½” thick and several inches deep were punched into the soil, removing thatch and opening up areas for the root structures to expand.

The second aeration used a machine that punched 64 holes across, each one ¼” wide and 1 1/2” deep, in a tightly spaced pattern.

These smaller tines work well in colder weather, which RBCC experiences each spring due to its proximity to Rehoboth Bay. Smaller holes heal faster than larger ones.

The 1989 Salesianum grad earned an associate’s degree in his field from Rutgers University. Maney had stints at Wilmington Country Club and Rolling Green Golf Club in Springfield, PA, site of last year’s U.S. Women’s Amateur, before coming to RBCC.

After the second aeration, Maney’s crew spread new sand topdressing on the greens and approaches. This required between 70 and 80 tons of sand.

A company came to the course after our meeting for a procedure called Dry-Ject. This process injects additional sand into the soil profile of the fairways, which should help with drainage.

The treed area between the twelfth and sixteenth holes is now less treed than it was. Over the past winter the RBCC staff removed 68 sweet gum trees, leaving dozens of tall loblolly pines in place.

Trees on golf courses are nice to look at, but too many of them will cause sunlight and air access problems for the turf grass.

We then went to see a new aeration system at the pond alongside the eleventh fairway. Pond Hawks use solar panels to power small pumps that feed the underwater aerators in the pond. Even in gray skies, the pumps worked to help maintain oxygen levels and minimize algae and other problems.

Maney said this is the second such device to be installed on the course.

We also discussed one of the main benefits of the club’s 19th hole, set between the Bay and the clubhouse. The extra hole makes it possible for the club to restore other holes, while keeping a full complement of 18 holes in use.

Last August, for example, Maney and his staff “killed” the seventh hole, and then spent the late summer and fall re-building and re-sodding the green, the fairway, and the rough, all the way back to the tee boxes. It looks great.

None of this work is cheap, but it is certainly necessary.

Baywood Greens is holding its first Demo Day from 4 p.m. to 7 p.m. this Friday. Vendors include Titleist, Callaway, and Tour Edge. Appointments are available, or you can just show up.

The Kings Creek Ladies 9 Hole group played a “Far Out” game May 3, where the par 5 scores are subtracted from the total score for each player.

The RBCC 18-Hole Ladies Day May 3 was a team event, with first gross won by Jeanne Allen, Britny Whitby, Joan Crowley, and Linda Welch as a blind draw.

The Sussex Pines 18 Hole Ladies group played a Criers tournament May 9, in which the four worst holes are adjusted down to par minus the handicap allocation for each hole.