The coronavirus pandemic affects nearly every aspect of Cape Region life, with closures, cancellations, and other disruptions.

Cape Region golf clubs are among the businesses that are taking huge hits, but are also showing remarkable resiliency. 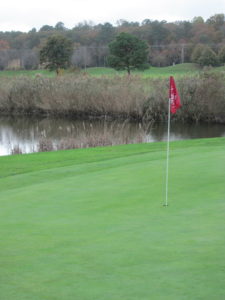 Leave the flagstick in the hole while playing, and try not to touch it when retrieving your ball. It may help prevent infection.

For example, American Classic shut down its café but remains open for golf. Britt Morrison says they offer free pull carts to encourage walking. She also said, “We put a list of 20-second song choruses in the bathrooms to promote correct hand-washing,” which is a great idea in my opinion.

Head golf pro Kevin Wiest of Kings Creek CC said, “At the current moment all carts that come in are being sanitized when they come in and before they go out. We are constantly spraying down doors and counter tops with Lysol disinfectant. We are cancelling all organized golf events so as not to promote any social gatherings.” Pat Mastrian, the head pro at Rehoboth Beach Country Club, said they are taking similar precautions.

Chris Adkins, the general manager of the Rookery golf courses, sent out this post on Facebook: “For now we plan to stay open. We will continually be sanitizing high touch areas including our golf carts in order to minimize the risk to anyone visiting out facilities.”

The Rookery also shut down normal dining operations. Golfers can still order take-out at both clubs, and head golf pro Butch Holtzclaw said they are also keeping their beverage carts in service.

At Mulligan’s Pointe, players may request to ride alone in the golf carts. Michelle DePalma also said, “We are operating under advanced cleaning protocol to ensure our golf course remains a clean space.” In addition, the club strongly encourages use of its online booking options and paying by credit card to limit physical contact between the staff and customers.

Baywood Greens head golf pro Tony Hollerback said they tell golfers to leave the flagsticks in, and not to touch them. Just in case, however, Baywood staffers are disinfecting the poles at least daily, along with other touch-prone areas.

The Delaware State Golf Association’s events at Baywood Greens March 25 and Cripple Creek on March 27 will not be held, but the courses remain open for play. Contact the clubs for tee times.

The DSGA’s first official tournament is the Spring Classic in early April. Executive Director Laura Heien said, “We are working with both Kings Creek and RBCC to come up with alternative plans in light of this situation.”

She echoed the sentiments of the Cape Region clubs with this additional comment: “As the Surgeon General has said, social distancing doesn’t mean social disengagement or isolation – with mild weather forecasted, a golf course is probably one of the most calming places to be for a few hours of the day!”

A familiar and pleasant stroll down Magnolia Lane

The sudden coronavirus-caused absence of their favorite annual rite of spring, The Masters Tournament, generated an instant new Masters memory for millions of golf fans without even being played.

Fortunately, there’s an alternative, mainly because this tournament always takes place at Augusta National. That means the stories and memories of each tournament layer each upon each at every hole or other recognizable location on that amazing bit of former nursery property. 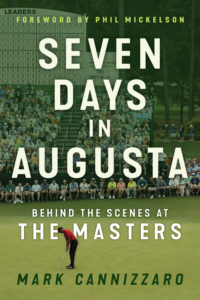 Mark Cannizzaro is a longtime New York sportswriter. He gathered together many of these well-known tales of golfing triumph and disaster and put them into an enjoyable book-length collection: Seven Days in Augusta: Behind the Scenes at The Masters (SRP $26.95 hardback; e-versions also available).

It’s not the same as watching The Masters, but in the current circumstances it will do just fine as a substitute.

The book’s structure follows Masters week at Augusta, from the community’s preparations (and economic dependence) for it through the late Sunday donning of the green jacket by the winner. Many pieces are what would be called features or sidebars in a newspaper that go beyond the scores. They flesh out the descriptions of eagles, birdies, pars, bogeys, and disasters, and often highlight the human frailties and quirks of the golfers.

We learn how the local paper carries forward Masters traditions with its veteran crew of sportswriters. We learn about the famous tree under which so much golf business is conducted. We learn about the Par 3 contest, as well as how the membership of Augusta National came to include females. And of course, we learn about Arnold Palmer and his influence.

Tiger Woods’ triumphs at Augusta, from his initial 1997 victory to his amazing 2019 win, are well-covered, along with other winners and some famous losers, who are sometimes the same person.

Longtime golf fans won’t learn too much new about The Masters in this collection, if they’ve been paying close attention or have read other books about it. Those readers should nonetheless keep in mind that there are thousands of others for whom these stories are unfamiliar or only dimly recalled, because they were either too young or not even alive at the time.

Cannizzaro did a nice favor for the more casual or young Masters fan with this compilation. It’s well worth their time, especially during this odd break from the norm.