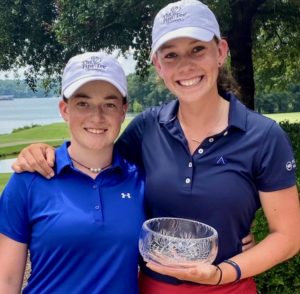 Congratulations to Hannah Lydic of Ocean View, who tied for second place at the inaugural First Tee National Championship tournament, held at Clemson University’s Walker Course June 22-24. The incoming senior at Sussex Academy played the three-round contest in one over par, three strokes behind Symran Shah of Carrollton, TX.

Lydic’s sister Sarah, the 2021 Delaware state high school champion, tied for seventh place with her 6-over par total. She will be a tenth grader this fall at Sussex Academy.

The Championship was originally scheduled to take place last year, but the pandemic pushed the tournament to 2021. The event included First Tee participants from all over the United States, with 24 players each in the boys’ and girls’ categories selected among 180 applicants.

Clemson is a 10½ hour drive from Ocean View and in the upland portion of South Carolina, making its Walker Course a very different challenge than the Lydics’ home base Bear Trap Dunes layout. Sarah said, “It was really hilly.” Zoysia greens also gave the sisters a few challenges at first, but Hannah also admitted to later making several 30-foot putts.

The sisters have been active First Tee participants for many years. This summer they are also giving back by serving as Junior Coaches at First Tee – Delaware sessions. “We act as mentors and show the kids how much we love the game,” Hannah said. “They see us and it inspires them to be us. It’s really cool,” she said.

The fact that the National Championship players were all First Tee kids made a difference. The sisters said it didn’t feel as cutthroat as they have experienced at other national tournaments, and the participants’ First Tee background gave them something to talk about.

Leslie and Garrett Lydic, the proud parents of these talented juniors, praised the tournament operation. Participants and their families stayed in a hotel adjacent to the course, with opportunities to meet and greet the others. There were also group dinners with guest speakers.

Hannah said, “It was run great. In addition to the tournament, we also had putting games and got to know each other.”

The family’s First Tee experience is worth celebrating. Leslie and Garrett are physical education teachers at Laurel Elementary School and run in-class and after-school First Tee programs there. COVID issues blocked some of their planned initiatives last year, but they plan to start over again this fall.

Bob Norris, Executive Director of The First Tee – Delaware said, “We are proud of all [Hannah and Sarah] have accomplished, and how they have embraced our programs and now help coach the girls in our programs. They are such good role models.”

Judy Wetzel won first place gross in the first flight. Lynn Sweeney won first net on a match of cards, with Erin Reid in second and Sally McGovern in third.

The Kings Creek CC Ladies 9-hole group played an Evens In game June 22, counting only the scores on even-numbered holes.