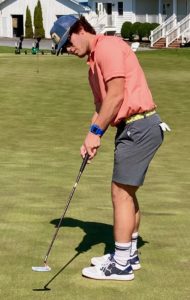 Cape Henlopen HS golf team player Forest Dotterer watches a putt roll during a recent practice round. The Vikings have three match dates scheduled for the week of April 25.

Thankfully, this aspect of the pandemic is showing signs of disappearing for 2021.

The $150 entry fee covers the range, golf with cart, a box lunch and gourmet dinner, and $10 in drink tickets for the refreshment cart or the cocktail hour. A $5,000 putting contest takes place at 11:30 a.m. with the shotgun start for the round at noon. The putting contest prize will be split evenly between the winner and the Oak Orchard Boys and Girls Club in the winner’s name. Hole in one prizes can also be won at the four par 3s during the round.

Register for the event at longnecksunriserotaryclub. com/projects-2/. For information about sponsoring the tournament, contact Mike Hall at jandmhall1227@msn.com.

The 11th Annual Eleanor Soltner Memorial Golf Outing is also seeking sponsors for its event, scheduled for July 23 at Mulligan’s Pointe near Georgetown.

The scramble-format tournament supports the Delaware Hospice Center in Milford, DE, and is named for an avid Cape Region golfer. The event moved to Mulligan’s Pointe this year after ten successful tournaments at the now-shuttered Rookery North.

Sponsor levels run from $100 to $5,000 and feature a variety of playing and recognition benefit options. Silent auction items are also sought.

Last fall the marketing folks at PRO Compression sent me some of their golf-specific socks for testing and review.

My first impression was that they knew how old I was and that they are targeting seniors. I never thought of compression socks as useful for anyone other than the older generation or frequent travelers whose legs bothered them after hours of flight time or driving. 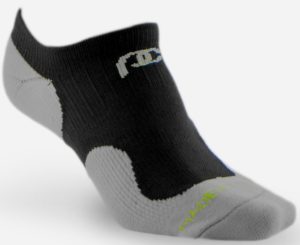 I am pleased to report I was misguided.

Compression socks are recognized as a potentially valuable element of a sports wardrobe, especially for athletic endeavors that call for hours of standing, walking, or movement. The pressure applied by the socks during use helps increase blood flow and recovery afterward.

I used the nylon-poly blend PRO Compression socks during four rounds of walking the Bay Course at Seaview Resort during last fall’s ShopRite LPGA Classic presented by Acer. I also tested them during several long bike rides. More recently I wore them during my regular rounds of 18 holes and then walking another 7-9 holes afterward while coaching the Cape golf team.

I tried the No-Show version ($32 SRP) whose coverage stops just above the shoe line. They fit very snugly when putting them on and becoming accustomed to the compression effect takes a little while. Once underway, however, I didn’t really notice the difference.

The real change came after the rounds. My feet didn’t have the usual sore or tired reaction to all that walking. Neither 27-hole days nor 30-mile rides created any issues for my feet – leaving me to wonder if there’s such a thing as a compression bodysuit for the rest of me.

If your feet give you fits after a round of golf, I suggest you try a pair of compression socks and see if they help. They did for me.