Over a dozen Cape Region teenagers are busy working a summer job that is rare nowadays, but which used to be common at thousands of golf courses a few decades ago.

They are caddies, at Rehoboth Beach Country Club. At the same time, they are earning valuable experience and credits toward a potential Chick Evans Caddie Scholarship.

Each year the Evans Scholarships award over 800 caddies in the United States a full ride for tuition and housing at nineteen universities. The Western Golf Association and Charles “Chick” Evans, Jr., a justly celebrated amateur standout in his own right, created the fund in 1930. Participating universities include Notre Dame, Penn State, Washington, Miami, and Northwestern. 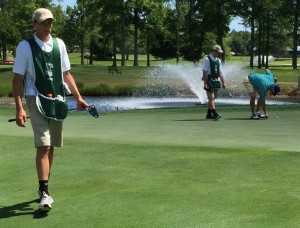 George Bushby, assistant golf pro at Rehoboth Beach CC, oversees the program along with first assistant pro Pat Mastrian. Bushby credited a member of the club with approaching the club’s pros about starting up an RBCC chapter over the past winter. The club is the first one in Delaware to join the Evans program.

“We reached out to the guidance counselors at Cape Henlopen High School, and they were very interested and cooperative,” Bushby said. “The kids are all 9th and 10th graders, and we brought a dozen of them and their parents to the club to go over what was involved.” Word of mouth spread among the students, and the program now includes 15 young caddies.

Bushby explained that each caddie completed three training sessions, including time on-course and a written examination. The caddies began doing their required loops on the first weekend of May. Bushby and RBCC head golf pro Charles Schuyler said that each round earns a caddie $40, with the club’s normal cart rental fee supplemented by program funds. The members can always give the caddies a nice tip, of course.

The caddies have already worked well over 100 rounds. Before the summer ends, each caddie could have the chance to complete dozens of loops.

Bushby and Charley stressed that the club members and the professional staff understand and accept that caddie training is a shared responsibility, from the basics of how to carry a bag to how to comport themselves while on the course. “They’re amazing kids,” Bushby said.

Dustin Riggs, a new assistant pro at Rehoboth, said, “They’re just like sponges. They want to learn all about this. It’s great.”

For more information about the Evans program, including how to donate, go to www.gaesf.org or call the Western Golf Association at 847-724-4600.

Tommy Clayton made a hole in one on the eleventh hole during the event, on June 19.

The Kings Creek CC Ladies Member Guest featured a sell-out crowd June 26 with 124 players. The day’s theme was “It Takes a Woman….From the Historical to the Fantastical”, and the two-better balls of four format led to some low scores.

Joanne Yurik, Mary Gardine, Peggy Castle, and Kathy Casey won first place gross in the third flight, while Francie Young, Sue Bardsley, Cyndy Simeone, and Robbie Monkman finished in first place net in that category. Robbie Monkman won the putting contest among the Kings Creek members, with Meredith Loosse finishing first among the guests. Eileen Riddell was closest to the pin on the fifth hole for the members, with Joan Martin best among the guests on that hole.

Hope Adams had the member-best shot on the eighth hole, and Sharon Mears was the best guest. Cyndy Simeone had the best guest approach shot on the eleventh hole, while Joan Crowley was the closest member. Anita Pettitt had the closest shot on the sixteen hole among the members, with Joan Bixler best among the guests. Meredith Loosse had the longest drive on the second hole, with Gina Luke the longest hitter on the tenth hole.

Charles Codrey, Jim Sadowski, Susan Brady, and Kim Brooks combined for the third place spot. Susan Shockley and Ken Carouthers had the closest to the pin shots on the third hole, while Joann Foster and Gary Allison were best with their approaches to the sixth hole.

See you at the Women’s Open?

I am representing The Cape Gazette at this year’s U.S. Women’s Open, held at Lancaster Country Club in Pennsylvania. If you see me there, give me a wave.