Coaching with a flourish

When I interviewed Cape Henlopen High School’s new head golf coach Corey Groll recently, he told me how much he appreciated the contributions of Claudio Smarrelli, the volunteer coach for the junior varsity.

High school junior varsity golf is an odd sport, at least in Delaware. The players only rarely have a chance to compete against other schools. Nearly all of their season is spent practicing and playing matches among their fellow teammates.

Groll fully approved of Smarrelli’s plan to make sure his young players learned the rules of golf as well as the etiquette that makes the game an honorable pleasure. He also told me that Smarrelli’s own skill as a low-handicapper would also make a deep impression on the kids.

On March 25, JV Vikings Jaryd Sykes, Stefan Fitzgerald, and Ricky Berl joined Smarrelli for a practice session at The Rookery Golf Club near Milton. Golf pros Butch Holtzclaw and Mike Connors donated the use of several buckets of practice balls, and also graciously permitted the boys and their coach to play a few holes.

The foursome reached the ninth hole, a short par 3 that plays 115 yards over a pond from the white tees. The boys hit first, and then Smarrelli pulled a wedge from his bag and took his swing.

Here’s how the coach described what happened next: “After landing on the green it bounced twice and rolled into the cup. If you could see the players’ expression on their faces for them to see a first hole-in-one! We did some high-fives.”

“We went to the range where Mike Connors was giving lessons to a few seniors and explained to him what happened. One lady thought we were shouting because I made it over the pond. We all laughed.”

That’s coaching with a flourish.

Smarrelli obviously enjoys his volunteer work with the Cape golfers, and this hole-in-one will be a special memory for him and the three boys. In a recent email, Smarrelli graciously complimented his entire team: “The young men and women in my JV team are a bunch of great golfers to be, with great enthusiasm and bravery to show up for practice in windy and cold days.”

Having a coach that can hit great shots can certainly help keep up their spirits, too.

Cape Varsity bounces back with win over Delmar 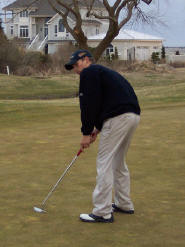 John Purple putts on the ninth hole at Rehoboth Beach CC during the Vikings’ match with Delmar High School.

Cape Henlopen’s varsity golf team bounced back from its opening-match loss to Caesar Rodney with a 174-195 win over Delmar on March 25 at Rehoboth Beach Country Club.

Brett Hertel led the team and took medalist honors with a 40 on a gray, cool day, but he wasn’t too satisfied with some of his shots. “I hit one bad drive on the 6th hole and went right [into the water]. That was a double. I also doubled 8 and 4. On 8 I hit a Mickelson flop to 12 feet, and lipped out [the bogey putt].”

Jason Hastings scored next-best with his 42. “I drove the ball well. Actually I was hitting everything pretty good today.” His only double was also on 8, caused in part by a forced lay-up.

John Purple’s 44 was a bit off from his usual scores. “I had nothing going. I was long downwind and long going into the wind. I was off by 2 clubs sometimes.”

Andy Lee had trouble with the first half of his round, leading to a 48. “I was five down after the first five holes, but I had a good comeback for the last four. I beat my guy by three strokes.”

Senior Chad Cross had some troubles in his first-ever varsity match, with a 51. “I went into the water a lot. It can only get better from here.”

Rain forced the cancellation of the team’s March 30 away match with major rival Dover High. It will now be played in May.