Friend against friend at the U.S. Women’s Amateur

In the Round of 64 match at the 2016 U.S. Women’s Amateur, Shannon Brooks of Vienna, VA faced off against Anna Redding of Concord, NC.

Brooks’ parents told me the two teenagers were friends, and had played against each other since they were 12. Finding junior competition in Northern Virginia wasn’t easy, so the Brooks family sought out tournament options in North Carolina, where dozens of junior girls play events tailored to their skill level. That’s how Redding and Brooks met.

As collegiate golfers, Brooks at Tennesee and Redding at Virginia, there’s also a good chance they’ll meet in Division I competition.

In the small sorority of national- and international-grade golfers, therefore, a pairing of friends in the match play rounds was certainly a possibility. Brooks and Redding’s relationship with each other also seemed to affect how they played.

The nerves showed up on the first hole and continued throughout the round, in ways not seen in their two medal rounds at the Women’s Am.

Brooks’ par putt on the par-4 second hole was conceded, as Redding’s third shot from off the green made her par attempt more of a challenge than she liked. Brooks went two up.

Redding’s bout with nerves continued on the downhill par 3, when she overshot the green. She made a great recovery, but Brooks’ tee shot was a gimme-birdie. That concession put Brooks 3-up, and she went to 4-up on the fifth hole, with Redding still playing more erratically than she had in the medal stage.

Then it became Brooks’ turn to go shaky. She short-sided her tee shot on the par-3 sixth hole, and could not match Redding’s routine par. On the seventh, Brooks tried the same fairway wood shot out of the rough as Redding had attempted earlier, with the same wretched result. Redding gained another hole, and the match tightened.

Both girls bogeyed the 8th hole and parred the next two holes before each butchered the 11th, with matching double bogeys.

The tight, nervous play continued, but began to favor Brooks. She made bogey on the 12th hole, with a par putt that slid downhill past the hole. Redding’s approach shot to the false front green rolled backward 15 yards, and her recovery shot from there was a bit tentative, leading to a double bogey. Brooks went 3-up.

Both girls bogeyed the hard par-4 13th hole, but Brooks went 4-up at the next hole. Redding hit into the middle right greenside bunker, and her blast from there checked up 12 feet short of the hole. She conceded Brooks’ short par putt, as well as her bogey.

Brooks showed her nerves again on the 15th, when a drive into the right rough made stopping the ball on the uphill approach more difficult. Her second shot ran across the green and into the left bunker. Brooks’ third shot rolled off the green into the rough, while Redding’s approach from the first cut landed on the green. Brooks went back to 3-up. 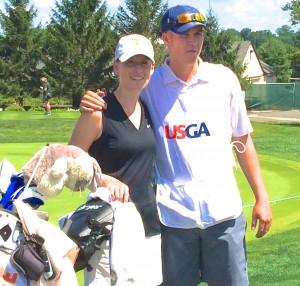 The match ended on the 147-yard par-3 16th. Brooks hit a very good tee shot to about 10 feet right of the hole. Redding’s tee shot landed in deep rough between the green and a bunker. Her chip was good, finishing five feet from the hole, but her par putt lipped out. Redding then smiled graciously and conceded the match, 4 and 2, as the girls hugged.

Brooks admitted after the round that the girls’ friendship affected their play.

“It was kind of unfortunate that I had to play against my friend, because I would rather played against someone I didn’t know. I knew I still had to pay tough, because she’s a good golfer and I knew what I was up against. I think we were both probably a little tight, a little nervous at times playing against each other,” she said.

“I lost the ball in some bad spots that I couldn’t really recover from,” Brooks said. “My putting wasn’t as good today. The greens were just running pretty fast, a lot more break. They had them in tougher spots, and they were just rolling out a ton, so you just barely had to tap the putt and it was pretty much gone, especially with the wind. If you were downwind you couldn’t really stop it,” she said.

“I still won 4 and 2, I just didn’t play my best, and I think most of it was my putting. I didn’t adjust well to the greens. They were smoother, and just faster all around on pitch shots, [and] on approach shots,” Brooks said.

Note: More on Brooks in an upcoming column.

The $150 entry fee per golfer includes a deli-style box lunch, range balls, golf, cart, a full buffet dinner with cash bar, and two on course drink tickets. Prizes include long and straight drives for men and women, closest to the pin, and first, second, and randomly selected third place finishers. There is also a raffle with several additional prizes.

For more information, contact Kate Gibson at Kate.gibson@verizon.net or 410-984-2548, or go to clothingourkids.org.