Collegiate golf talent continues to be attracted to the Cape Region, thanks to George Washington University and its golf coach, Scott Allen.

Of course, the fact that Ron and Sue Allen, Scott’s parents, just happen to be long-time residents and members at Kings Creek Country Club, may help just a bit.

On Monday, September 26, thirteen collegiate squads from 11 schools from the Mid-Atlantic and Northeast states played a thirty-six hole event on the tight 6,480 yard layout. This year’s tournament was the fifth annual fall event sponsored by GW here in the Cape Region. The teams traveled here on the weekend, and played a practice round on Sunday before the competition began in earnest the next day.

Drexel University won the tournament with a 589 (290-299), with GW’s A-team coming in four strokes behind for second place. Drexel’s Keith Snyder took medalist honors at three under par (72-67).

Ron Allen was proud of his fellow club members, about two dozen of which served as volunteers for the tournament to help out the Head Pro, Ty Mayers and his staff. “We never have any trouble finding folks,” Allen said.

The volunteers handle shuttle duties for some of the longer stretches between greens and tee boxes. They also serve as spotters for some of the tricky places where an errant golf shot can fly or bounce, such as along the sloping hillsides of the par-5 twelfth hole (formerly the second). Some work the morning round, while others come in to handle the second round in the afternoon.

In addition to his duties as GW’s golf coach, Scott Allen is also working as the Executive Director for The First Tee of Washington, DC, the new program designed to introduce more kids to the game and its life-long benefits. “We’ve had 700 kids this year,” said Scott. “We run the programs at Langston Golf Course, near RFK Stadium in Anacostia, and also at East Potomac Park in Southwest Washington.”

Allen stressed the life skills lessons that The First Tee program tries to instill. “We use golf to teach kids about things like honesty, integrity, and goal-setting, and try to show how what they learn in golf relates to real life.”

On that note, Mayers was impressed by the young golfers from the Naval Academy. “The B team guys really haven’t had much chance to play yet this season, and they’re doing well,” Mayers said. “The other thing that was really noticeable was that any time any of the Navy boys walked into the pro shop, they took off their hats before they crossed the threshold. Every one of them. Somebody’s been training them right.”

Mayers and the volunteers continue to be amazed at the skill level these young golfers display. “Some of these boys can really move it,” Mayers said. 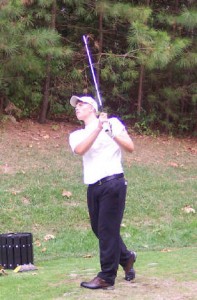 A few of these golfers had the advantage of a bit more local knowledge than their competitors.

“It’s been fun. We’re traveling around and seeing some new places. Our first tournament was in Liberty, New York,” Purple said.

Their uncle Dino and their grandfather Sonny live here, and the boys are frequent summer guests.

Nick finished tied with Purple in 28th place, and Vinnie finished eleven strokes back, tied for 61st among the 77 golfers.

Not every golf course welcomes the potential disruption caused by hosting a collegiate golf tournament.

Scott Allen and the other college golf coaches who come to Kings Creek really appreciate the warm reception they’ve received every year of this special event.