I am not surprised at increases in dues and other fees showing up in recent notices to Cape Region golfers.

Jared Doerfler’s “Perfect Putt,” a website devoted to the golf business, recently noted the inflationary pressures that hit just as hard in the sport as everywhere else. I confirmed his analysis in chats with local pros and course superintendents.

With fertilizer costs going up at a 40% annual clip, along with rising fuel and labor expenses, Doerfler’s conclusion rings true: “Golf course costs have exceeded the inflation rate last year, and it is starting to squeeze the operating margin. Golf courses are raising prices where they can.”

They are also avid golfers who tired of wearing the brands of golf shirts you see everywhere.

“We wanted to wear our own stuff,” Mize said during an interview at the 2022 PGA Show. That led to the successful creation of their Chuco Golf apparel, featuring a golf-themed sugar skull logo like those seen during Day of the Dead celebrations.

Mize said they put the logo on some shirts and almost immediately were asked by enthusiastic golfers where they could buy them.

Some direct market research methods pay off quicker than others.

The logo appears on the left chest in most of the technical fabric designs, although the Black Scatter version features dozens of skulls spread across the entire shirt. For other options the logo appears on the right or left arm. It sits in an off-center location on the company’s golf hats.

I like the designs that include colorful placket insets, setting off that part of the shirt from the rest of the outfit. Fabric options for men and women include heathered looks as well as solids, color blocks, and stripes. Suggested retail prices range from about $45 to $59. 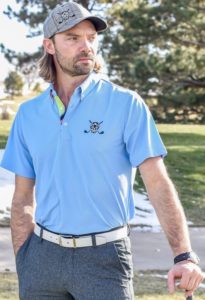 The company also offers three golf shirts for juniors, modeled by Vega’s son on the company’s website. Mize said the sales success with the L’il Chuco shirts has been amazing.

The Chuco Golf line is available at several locations in the west and southwest, as well as PGA Superstores as far east as Illinois. The company also has a well-designed online store at its website.

Mize said the company would “love to come east.”

I am sure they would be welcome.

I give LPGA golfers a lot of credit for how they popularized athletic clothing styles.

These players understand the physical demands of their sport, and dress for freedom of movement and performance in all weather conditions. Several take their cues from athleisure styles seen so often off course as well as on.

Anatomie is a growing company whose fashion pedigree is well situated to take advantage of the opportunity LPGA golfers created.

Established in 2006 by a former gymnast and her bodybuilder husband, the Miami-based company prides itself on its high-end athletic styles. “Performance athleisure apparel is our DNA,” said Jennifer Thompson, National Manager for Anatomie’s Spa, Resort & Golf Division. “We like to say we focus on fit, fabric, and functionality.” 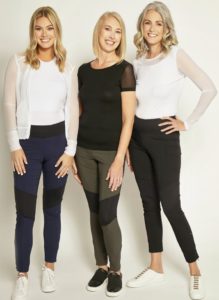 We met at the Anatomie booth at the 2022 PGA Show and discussed the fabrics and other elements that make up their brand. Thompson said their customers told them about using the apparel while playing golf. The company took the hint and began selling directly to that sector.

She showed me a swatch of Italian Honiara cloth that is used for many of their items, such as the Skyler travel pant ($228). A performance stretchable woven fabric made with 92% Polyamide and 8% Elastane, the material was also incredibly light to the touch.

Thompson also showed me the Power Mesh fabric that is almost completely see-through and yet, as she said, “mosquito-proof.” The Addison jacket ($228 SRP) provides UV protection, full sleeves, and a double-banded bottom. She suggested it was well-suited to early morning rounds where just a bit of warmth was handy for the first few holes, without lugging around something far heavier for the rest of the day.

Thompson used a banana to illustrate how light and travel-handy Anatomies’ clothes are – according to one of the ads she showed me, two pairs of their pants weigh less than the fruit.

The clothes are wrinkle-resistant and quick-drying, both essential to the target audience of active travelers. Anatomie also sells a small packing cube capable of holding three pairs of pants and two jackets, with a combined weight of four pounds. Once unrolled, the form-fitting fabric flattens quickly into a smooth appearance, as Thompson demonstrated.

Women’s sizes run from XS to XL, and the pricing is not for the bargain minded. The men’s line launched last year. Thompson said they do a nice direct to consumer business at the company’s website and the items also sell at golf shops, resorts, and high-end specialty shops throughout the country.