New book details the many facets of golf nutdom 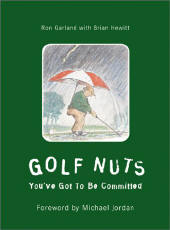 Golf Nuts: You’ve Got to Be Committed

The golf fanatics described in this book make me look deeply sane by comparison.

Ron Garland is the founder of the Golf Nuts Society, a social organization with its own website, its own sanctioned tournaments, and its own unique rules for admission and recognition.

In fact, this is the Official Book of the Society. Even so, it should sell very nicely to at least three ready-made audiences.

First, of course, are the Golf Nuts themselves. Most everyone enjoys reading about themselves, and extremely avid golfers are no exception. The Society members will love this book, as it will confirm their standing within that very special segment of the golfing community.

It’s full of examples of truly out-there golf affliction beyond all reason.

One man plays a round of golf with his future father-in-law on his wedding day, and arrives at the chapel only minutes before the ceremony begins. He then plays 36 holes a day, without his new bride, on the first three days of his honeymoon. The first round on the first day starts at 7:32 a.m.

Not so shockingly, this marriage didn’t last.

Another registered golf nut played golf in Alaska in 25-below temperatures, with a lipped-out putt from 162 yards on the second hole.

Some golf nuts not only know their equipment, they know all about the playing implements of others, too. Garland tells about sitting near the 18th tee of the Phoenix Open with another golf nut, and listening as the man describes in enormous detail the contents of each PGA Tour pro’s bag.

Garland was perfectly fine with that performance, by the way.

The second most likely purchasers for this book are the golf widows of golf nuts (this is primarily a male sickness, although there are several examples among those of the female persuasion). For these long-suffering spouses, this book should provide a certain amount of comfort, much like the sorts of connections made at an Al-Anon meeting. The stories will show them that they are in large (if not equally mystified) company, married to golfers who neglect them and their children for the sake of their silly game.

These segments of the book, it’s safe to say, do not cover Golf Nuts with glory. In fact, many of them seem like arrested adolescents at best, and selfish jerks at worst. On the other hand, in some cases the golf nuts’ focus on the game is a way for them to relieve the stresses of other problems. For these golfers, their families seem to understand that fact.

The third group who will probably buy copies of this book is composed of those who might think they qualify as golf nuts, and/or their families and friends.

Some, for example, may have a tidy little collection of ball markers from the courses they’ve played. Others might own, say, several dozen golf books. Still others might use two VCRs in one day to capture all the action during an 11-hour broadcast of the Ryder Cup (true story—happened in my own house, actually, twice).

Either these golfers or the folks who know and love them may buy this book, but for somewhat different reasons. The golfers might read this book and be grateful to learn that while they certainly qualify as avid golfers, they’re not completely insane about it. On the other hand, their families and friends might think that this book will serve as a cautionary tale, before their particular golfer goes off the deep end.

No matter who buys this book, I would not recommend reading more than a chapter of it at one sitting. It’s hard to be in the presence of this much pathology for very long.