This week is The Open Championship at Royal St. Georges. The historic links should be a great challenge as it has in past Opens, as well as a visual treat.

How best to photograph relatively flat land such as links courses is an easily solved conundrum when you consider the angles of daylight available.

Shadows created by low-angle lighting adds depth, dimension, and sometimes a stark beauty to landscapes that may otherwise seem dull by comparison.

For example, go to The Point at Cape Henlopen State Park about 30 minutes after sunrise, and look to the north toward the end of the Cape. The view is far more impressive than at, say, high noon. 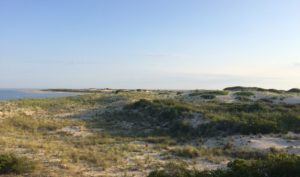 Iain M. Lowe and Christopher J. Lowe understand how to handle this challenge and did so beautifully in their new coffee-table picture book, “Scotland: Home of Golf” ($45 SRP; currently backordered at Browseabout Books and available online at pathway-book-service-cart.mypinnaclecart.com//pathway-catalog/Scotland-home-of-golf/).

Using drone camera shots and the low sunlight angles that can easily be obtained in Scotland’s early morning, late afternoon, or the long summer evenings, the Lowes captured great images of fourteen links courses throughout that very northern country.

Several courses will be familiar to even non-golfers, such as The Old Course at St. Andrews or Trump International, perhaps better known for its owner than the course itself. Others are relative newcomers but equally appealing visually, such as Dumbarnie Links a few miles south of St. Andrews, or Castle Stuart in the Highlands near Inverness. 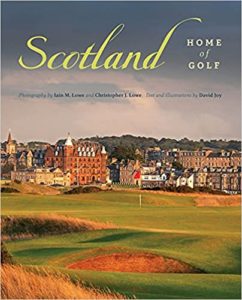 For each course, writer/illustrator David Joy provides a detailed description, its place in golf history, and occasionally an explanation of how to play some of the holes shown in the photographs. He also supplements the photographs and commentary with illustrations to enhance the reader’s experience.

I enjoyed the multi-hole photography the best. In addition to showing the courses in their best light both literally and figuratively, these pictures also provide useful examples of how a golf course design can make best use of the terrain on which it lightly rests.

This is a pleasant addition to the already sizable options for golf-themed coffee-table books. It takes advantage of new drone technology to show some very familiar places in new and flattering ways.

Be careful out there

Heat cramps can appear in the abdominal muscles or the legs during extreme heat. Heat syncope is a sudden loss of consciousness or strength, with fainting often the first sign.

Heat exhaustion can produce clammy skin that is cold to the touch, with weakness, vomiting, heavy sweating, and sometimes fainting.

The worst stage of heat exhaustion is a heat stroke. The golfer’s skin is dry and hot, and sometimes is accompanied by confusion, loss of consciousness, a rapid heartbeat, and a high fever.

For heat cramps, if the golfer is alert, have her drink Gatorade or a similar electrolyte replacement, some lightly salted water, or just cool water, and massage the cramps until the muscles relax.

For the early stages of heat exhaustion, convince the golfer to lie down in a cool place. Place cool wet cloth or cool water on the skin to help bring down the temperature. Cold compresses on the neck, groin, and armpits may help.

If the golfer faints, or is deeply confused or disoriented, or seems to have a high fever, don’t waste time. Call 911 for immediate medical attention and call the pro shop to let them know.

Mulligan’s Pointe Ladies 18-hole group played a “Mutt and Jeff” game July 13, where only the par 3 and par 5 scores count toward the total.

The Kings Creek CC Ladies 9-hole group played a 1, 1, 2 game July 4, with one best ball counting on the par 3s and 4s and two best balls counted on the par 5s.