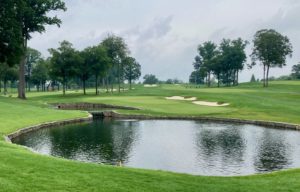 Caden Jackson, the WCC caddie assigned to me, is a pleasant Cheyenne, WY native, a Professional Golf Management major at New Mexico State University, and serving an internship at WCC this summer as part of his PGM requirements.

The 2021 Eastern Wyoming Athletic Conference tournament winner and I had a fun and wide-ranging conversation – high school golf in Wyoming and Delaware, the Professional Ability Test for the PGA (he passed; I didn’t), internship responsibilities, and what was like to play golf at sea level compared to Rocky Mountain elevations.

Rain came shortly after our start and remained for nearly the entire round. Wet conditions made a challenging course extremely difficult, especially when drives missed fairways.

Nonetheless, Jackson kept up a steady stream of affirmations, despite downpours and dodgy swings.

The thick rough was at least 4 inches high. Golf balls could go to the bottom, sit in the middle, or rest near the top of the turf. I used an 8-iron or a hybrid to advance the ball to where I had a chance for a bogey.

Jackson said the rough is to be lengthened for the tournament. If that turns out to true, and you see a player miss the fairway during the Championship, say a little prayer for him.

Despite the rain, the bunkers were in great playing condition and easier to hit from than the nearby rough. That’s not always the case elsewhere, but it has always been true for me whenever I played the South Course.

Jackson’s advice came in handy several times. On one par 3, set at about 179 yards, he suggested a 4-wood instead of a hybrid, considering the rain and the incoming breeze. I lost sight of my ball immediately after impact. It finished 12 feet 4 inches past the hole, eventually good for a closest to the pin award.

Jackson’s ideas about where to aim recovery shots were the same as mine, and usually came off as intended. Those pre-shot discussions are among the best parts of the caddie experience.

We had a great time together, reaffirming my opinion that a good caddie can make any round of golf well worth playing.

Michael Shank is in his fifth year as the head golf professional at the club. We discussed the changes to the layout, both in routing and in preparing it to host the BMW Championship.

The South Course’s bunkers needed to be rebuilt in the aftermath of a summer tornado in 2020 that also tore down 300 trees on the South Course. Additional bunkers were also built to provide more challenges for the BMW golfers, often at 300 to 325 yards from the Tournament tees.

Routing changes for the Championship nonetheless kept the 18th hole and holes 5 through 9 in their normal locations. Others stayed on their side but in different spots, while others jumped to the other nine.

Shank said the Tournament’s hospitality needs were among the primary drivers of the routing changes. “There’s quite a build-out for the stands and other playing elements for the last four holes,” he said.

The relative difficulty of the two sets of nine holes also needed adjusting, Shank said. The South Course’s front nine normally plays harder than the back nine. He suggested the new arrangement evens up the scoring chances on either side.

Shank said the adjusted routing “functions very nicely” for the BMW’s needs. However, he does not anticipate that the WCC members will keep to the new alignment after the tournament.

Diane Braver won first place in the first division, with Maxine Ansbach in second and Sue Ahern in third.

Christine Allison won first place in the second division, followed by Donna Dolce in second and Kathy Hudak in third.