Please don’t give me these golf gifts, Santa

The global economy has not been so hot this year, so I imagine that the Christmas gift lists you’ve been sent this year are a lot longer than usual.

In my case, however, I’m happy to make your job easier, by making sure you know which golf gifts you do not need to put under my tree.

You can put them under someone else’s tree, but please, not mine. 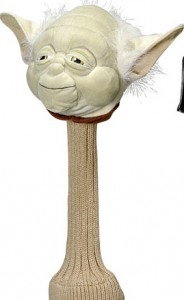 Odd head cover it is, yes.

For example, I’m really not looking forward to receiving an officially licensed Yoda Star Wars Golf club cover. Available at 80stees.com for “only” $25, the advertising copy I’ve seen for this item says that it will “Bring the FORCE into your game….”

Anyone who has seen me swing would know that I put enough force into my swing as it is, so thanks but no thanks.

I’m also not too keen on the Flair Hair golf visor, on sale at many web outlets for $19.95. 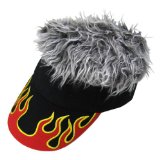 Proof that the shag carpet craze of the 1970s is still around–just in a different place.

I own a few golf visors, but the top of my head is no longer a candidate for direct sunlight, so I no longer use them. The Flair Hair visor takes care of that problem, by adding more hair to what’s already there, as it were.

Judging from the photograph, however, I don’t think anyone would possibly confuse what’s on top with what’s really going on below the visor.

Some other gift suggestions are frankly out of touch with today’s world. The sleeve cover for the 3-ball Bursting Golf Ball set says these balls will provide “instant laughter and hysterics on the course,” for only $9.95 (available at dwquailgolf.com).

On the other hand, the container also says “WARNING: DYNAMITE” in large letters. That kind of packaging display should make this gift a really interesting conversation item during your next inspection by a Transportation Security Administration staffer, at one of our nation’s busy airports.

I also have to wonder what the folks selling the Driveable Golf Cart Enclosures at dwquailgolf.com were thinking. At $112.95 apiece, the tan, black, and green fabric optional covers with their clear plastic windows are a nice way to keep warm during winter rounds. However, the camouflage cover version makes no sense, given our litigious society. Why wouldn’t you want to make sure other golfers saw you out on the course, instead of letting them watch their golf ball soar toward your camouflaged target?

Those of us with patriotic tendencies will also object to the American Flag Golf Towel, fetchingly priced at $14,99 at dwquailgolf.com. Exactly why would I want to wipe mud off a golf ball with an American flag? I would prefer not, thanks all the same.

In addition, I would really rather not be given my very own custom Bobblehead Golfer statue, courtesy of the folks at WhoopassEnterprises.com, for a base price of $105.

The ordering process calls for sending in head shot photographs of the front, back, and sides, and then filling in details such as hair and eye color, along with shirt, pants, and shoe colors. For extra cash, they will add a pair of glasses or a hat or tattoos, or all three, as well as a digital voice recorder.

I’m just not sure where this Bobblehead doll would fit in with my home office décor, you see.

Finally, Santa, I neither want nor need a combination cigar cutter/key caddie, shaped like a golf ball, offered at dwquailgolf.com for $7.95. The ad copy says owning this device will “eliminate searching for your cigar cutter on the course,” presumably because it “conveniently attaches to your golf bag.”

It’s still goofy looking to me, however, and I think I’ll just keep my miniature Swiss army knife handy for the occasional cigar.

Thanks again, Santa, for keeping this list in mind as you prepare for Christmas. Say hi to Mrs. Claus and the elves for me, too.