“We had all 100 openings filled,” said RBCC assistant golf pro John Wallett. “We even had a waiting list.”

Part of the reason for the increase from prior years was the tournament’s new relationship with the Philadelphia Section of the Professional Golfer’s Association. The Junior Open was the first of several tournaments to be held this week for junior golfers in the Cape Region.

Other participating venues included the Peninsula course near Millsboro, and Cripple Creek Country Club in Ocean View. Wallett estimated that at least 25 players came to play who are affiliated with the Philly Section, as it’s known. 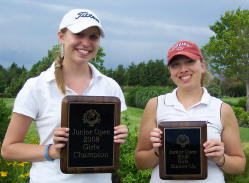 Those that came clearly enjoyed themselves in the pleasant weather conditions, and several young golfers played very well.

Andrea Daly took top prize among the girls, firing a seven-over par 78. The recent St. Mark’s High School graduate played on the Spartans’ highly ranked golf team, and made it to the state championship round. She will be going to Methodist University in North Carolina in August, to play on the women’s golf team and major in professional golf management.

“It was a lot of fun today,” Daly said. “The other girls were really nice, and it was fun to play with people who didn’t say mean things.” When asked who would do such a thing during her high school matches, she laughed and said, “Usually, boys that I out-drove.”

Aliza Shatzman of Ambler, Pennsylania took second place with an 82. She plays at Meadowlands Country Club in Blue Ball, and will be a senior at Upper Dublin High School in Fort Washington.

Her plans include playing golf for one of the Ivy League schools. “I had one birdie, and I wasn’t putting my best. This course is tougher than what I usually play—a lot more water,” Shatzman said. 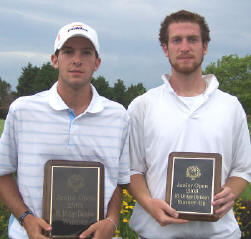 John Mlynarski of Harbourtowne, Maryland won the boys’ 16-18 group with a fine one-under-par performance. He graduated this year from Sts. Peter and Paul in Easton, and will be playing for the Division I Ohio University squad this fall.

Kyle Slowik of Hockessin, Delaware won second place with his 73. He will be a senior next year at Archmere Academy in Claymont, and “just missed” the cut in this year’s state championship. “I like this course a lot,” he said. “I played last year and came in fifth. I’ll be here next year, too.” 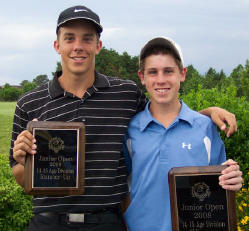 Ralph Blasey of Kensington, Maryland won the boy’s 14-15 category with a 73. Tyler Carpenter, who will be a junior at Caesar Rodney High School this fall, took second place with his 77.

Just as the event was winding down, heavy clouds rolled in and there were a few thunderclaps.

The threat of bad weather put an end to the idea of a playoff in the boys’ 12-13 category, where Braden Shattuck of Aston, Pennsylvania tied with Jon Stewart of Chester Springs, Pennsylvania with a pair of 77s. Instead, they were awarded co-champion honors. 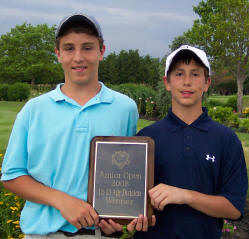 A huge thunderstorm hit the course just as the award ceremony completed, so the goodbyes were quite a bit shortened, but most players and their families were able to escape the rains and high winds.

The pre-tournament luncheon honored this year’s recipients of the 2008 Delaware State Golf Association Scholarship awards, which totaled $48,000 over a four-year period.

Greg Matthias of Salesianum School in Wilmington won the first annual Robert B. McCurry $5,200 scholarship. He’ll attend the University of Delaware. The award honors the late former Toyota and Chrysler executive, a long-time member of Rehoboth Beach CC, and a founding member of the scholarship fund.